Because we had predicted it would be unbearable to be near a TV on this election night, we chose to join the art aficionados at the Art Gallery of New South Wales for the first night of Ken Unsworth’s ‘popera’, The House of Blue Leaves. 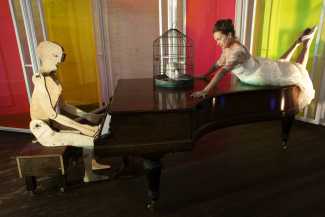 If this happened in the show it was after we left and would have required a transformation of the black decor.

As a distraction it was a major failure. I can’t give you a review because we left after a bit less than an hour. The image above makes it look like fun, and maybe the fun started after we left. The show involved music, dance, sculptural creations, appalling sight lines (exacerbated by sections of audience that radiated entitlement), terrible timing (long waits while clanking and scurrying behind a closed curtain weren’t quite masked by dreary chords from the piano). Much of the action happened close to the floor, and so was easily visible only to the front row of the audience. We were in the fifth row, so relied on guesswork for quite a bit of it.

Given all that, the show started promisingly. After a reverberant male voice proclaimed ‘In the beginning’ and variations, the curtain opened to the sound of heavy breathing on a more or less blank stage (there was a doll of some sort lying up the back left, but it was hard to tell if it was meant to be there), and then a further curtain opened at the back right to reveal the source of the heavy breathing, a woman in a nightie and body stocking lying on her back with her legs spread, crotch towards us. After a little while a small grotesque winged figure descended from the ceiling and rested for a moment between her legs (I think – the woman had moved around and so had people’s heads, so I could no longer see her at all). Then it rose again, and when halfway to the roof emitted a shower of fairy dust, or succubus sperm. A ripple of laughter. The only one of teh evening. The curtains closed.

There followed a song, beautifully performed by Natalie Gamsu in a shiny black frock, in German, something to do with morgen.

A man in black carried a helicopter onstage and popped three balloons by pointing it at them. There were boy sopranos, just their heads in urinal like stainless steel bowls, singing ‘See that ye love one another’. Natalie Gamsu made another appearance, her head poking out of a hole in a tall white boxy structure on wheels, this time singing in Spanish (‘Contorna‘) to a group of masked dancers. Slender wooden poles descended from the ceiling and made occasional clacking sounds that startled the dancers; after a while hands emerged from the ceiling and detached the poles, so that they fell onto the stage. Occasionally, as when a woman in a white dress floated up to land on the table holding the urinal-bowl-boys’-heads, there was a moment that seemed to promise something. But she just floated down to the floor again, helped by a man in black.

To my untutored eye, the choreography would not have disgraced a very good high school performance. The dancers were fine. Everything was done with great solemnity. There was nothing even faintly pop about the music or the decor. It was po-faced rather than pop, and not at all operatic. It was theatre without theatricality, entertainment without amusement, earnestness without seriousness.

One of the young men who made their escape at the same time as us said it was probably going to be brilliant from then on, and we’d kick ourselves when we read the reviews. He was joking.

We got home in time to see 20-year-old Wyatt Roy tell the cameras, ‘I want to be potentially the politician that is available and that gets back to people, that is connected to the community and has their pulse on the issues.’

This entry was posted in Diary and tagged Art Gallery of NSW, Ken Unsworth. Bookmark the permalink.