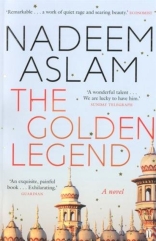 This novel includes the standard disclaimer. It is a work of fiction: not only are all its characters, events and organisations creations of the author, but not even any resemblance to persons, events or organisations is intended.

I’m sure that’s technically correct, but the book’s power derives from the pervasive sense that the Pakistan in which its characters live is at heart an accurate representation of the actual Pakistan, that the terrible world of murderous religious intolerance, both of the Muslim majority against the tiny Christian minority, and of militant Islamists against both Christians and other Muslims, is not too far from reality. Certainly the events that have disastrous impacts on all the main characters have close parallels in the real world: US drone attacks that maim children and worse, sexual violence resulting in death virtually ignored by the authorities, behind the scenes machinations that enable crimes committed by US diplomats to go unpunished, the atrocities committed by Indian military in Kashmir, suicide bombings..

What the book does is make these forces painfully real by showing how they work in the lives of a small group of people. By contrast, there are characters for whom Islam is a sustaining and life affirming force, in particular a gentle imam, who always carries a set of beads in one hand and a bulky ‘book of sins’ in the other. One of the beads gives delight to the children of his village – Christian as well as Muslim – because it contains a tiny image of a holy Muslin shrine and a magnifying lens through which to look at it. And there is a book compiled by the father of one of the characters, nearly a thousand pages long, that is

an acknowledgement and celebration of the countless ideas and thoughts that had travelled over the ages from one part of the planet to another. It outlined and examined how disparate events in the history of the world had influenced each other, the hidden or forgotten contributions that one set of humans had made towards the happiness and knowledge of another. Traditions and histories had always mingled, and nothing in the East or the West was ever pure.

The book is destroyed by a man from the Pakistani military, and the main characters spend the rest of the book reassembling its pages and sewing them back together with gold thread, reading excerpts as they do so. Through this device the horrors of the current sectarianism are interspersed with reminders that, for example, Dante had ‘in all probability’ read of Muhammad’s journey to Paradise and Hell before he wrote The Divine Comedy, and that over centuries the relationships between Muslim and non-Muslim worlds have been mutually respectful, cooperative and productive.

And through all this there’s a love story, a chase, poignant family stories.

This entry was posted in Books and tagged Nadeem Aslam, Novel. Bookmark the permalink.