… but just in case it turns out to be a story later, here’s a photo of me last night: 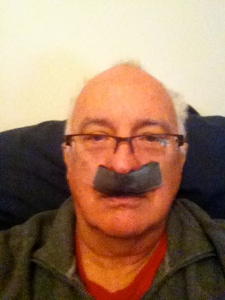 I was home from an outing to the Sydney Day Surgery where very nice ENT surgeon went inside my nose and removed some polyps (which, as seen on a big screen, filmed by fibre-optic telescope, resembled giant slugs that wouldn’t have been out of place in a Doctor Who episode). While he was there, he opened up the entrances to my sinuses (procedure known as Functional Endoscopic Sinus Surgery), straightened my septum, trimmed my turbinates (Seroplasty).

It was a remarkably pleasant experience. Andy, the surgeon, operates on children as well as adults, and his bedside manner couldn’t be better. For example, when I made the decision t0 have the surgery rather than live with recurrent sinus infections and chronic stuffy nose, he said he not only approved the decision, but was personally glad because it’s his favourite procedure. It’s hard to imagine a better way to inspire confidence without undue solemnity.

I had one moment of terror before the event: I heard a male voice introduce himself as ‘the anaesthetist’ to someone in a bed the other side of a curtain from mine, and go on cheerfully, ‘I’ll just wheel you into the other room and give you something to pop you off to sleep and you’ll be right as rain in no time!’ I contemplated calling the whole thing off. But the gods of medicine were smiling on me. A completely different man arrived a little later, introduced himself as John, explained that his colourful headcloth was so as to be less intimidating to the children he’d been anaesthetising earlier, answered my questions about the anaesthetic in a sensible and almost intelligible manner.

The theatre was a cheerful, busy place with plenty of colourful headcloths. I’d been there less than a minute before I became first drowsy and then  … came swimming back into consciousness in another room hearing an interesting conversation about work visas. Then there was an awfully long wait, during which I amused myself composing clerihews of which I remember only one:

Some cheese and tomato on biscuits, a glass of lemonade, visits from John and Andy, instructions from the Polish nurse (who was amused rather than offended when I thanked her by saying ‘Spasibo’, which it turns out is Russian, and very different from the Polish ‘Dziekuje’), and the Art Student drove me home.

I have to wash my nose out four times a day, and it’s not all pleasant in there, but so far I haven’t had any pain at all. I’m told my nose will swell up and look horrible in a couple of days. If it’s interesting enough I’ll post another photo.

This entry was posted in Diary and tagged clerihews, Surgery. Bookmark the permalink.

12 responses to “Not interesting yet …”