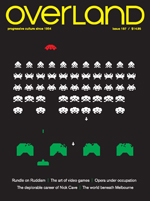 I initially intended to write a single post about the three journals that arrived in my letterbox this month, but after rabbiting on about Heat at such length I decided I’d better split them up.

In a world where passionate anti-Communist Robert Manne  has been described as a preeminent lefty, there’s clearly a crying need for Overland, whose Communist Party origins flutter from its masthead in the slogan, ‘Progressive Culture since 1954’ (and smirk on the back cover in a quote from The Australian describing it as ‘loopy-Left’). Even before the recent online Subscriberthon I’d been thinking of subscribing – I loved (and blogged about) the biography of Guido Baracchi, Communism: a Love Story, written by current editor, Jeff Sparrow, and I have been a freeloader (ie, online reader) for some time.

After the mainly elevated austerity of Heat, Overland‘s direct speech is refreshing. You won’t find essays here that begin as dauntingly as ‘It was while reading Jean-Paul Sartre’s monumental study of Flaubert, The Family Idiot, that I fell into an “epileptiform” state’ or ‘I have long associated landscape with passion and solace, and with the urge to record it’. Instead, we get ‘Last Sunday I went to church to be with my father, to say goodbye,’ or ‘Sometimes in life you get lucky.’ Not that the Overland pieces lack heft. The former introduces ‘My Father’s Body‘, Francesca Rendle-Short’s moving and, for my money, profound essay on her relationship with her father who has Alzheimer’s. The latter leads in to Fiona Capp’s ‘The Lost Garden‘, an extract from her My Blood’s Country, which promises to demonstrate Judith Wright’s continuing relevance (‘These hills and valleys were – not mine, but me …’).

There is some engaging fiction, some punchy argument (a trenchant go at Nick Cave, who is a closed book to me so I don’t mind one way or the other), short reviews, engaging essays (Sophie Cunningham, just popping over from Meanjin, visits the drains of Melbourne; Thomas Rye visits an island in Arnhem Land), a swathe of poems. There’s nothing I recognise as loopy-Left, though there are two very interesting articles – one on Ruddism and the other on education as export and its relationship to border control –  written in learned-Left language that makes for hard going (‘The CFMEU and other Left trade unionists wish to increase control of the borders of their labour markets at the point of intersection with the borders of the nation, and definitions of “Australians”‘).

The whole content is available online. I’ve linked to the articles I particularly liked.
—–
I’ve been lamenting the frequent copy-edit and/or proofing mistakes in Heat for a while. I kept my carping eye peeled for Overland as well. Interestingly enough, although Overland doesn’t include a credit for a copy editor (as Heat does), it doesn’t have anything like the same incidence of irritating and sometimes perplexing mis-edits and typos. There is a spot where lay and laid are used in place of lie and lay , but as this happens consistently over a number of paragraphs I’m willing to put it down to a difference of opinion (in which, of course, they are completely wrong!) rather than sloppiness or ignorance.