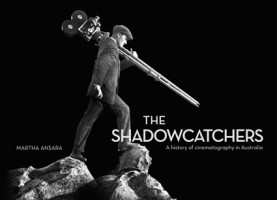 This book’s subtitle – ‘A history of cinematography in Australia’ – might lead you to expect a dry narrative of technological change with perhaps some discussion of industrial issues, economics and politics thrown in. The dramatic cover image of cinematographer Lacey Percival shouldering a Model 2709 Bell & Howell camera while picking his way over rocky terrain does, however, suggest something else.

Fortunately, the image is more truthful. There is plenty of text, including ample technical information (how else would I have known that was a Model 2709 Bell and Howell?). There are essays on the history of movie making in Australia (based on extensive interviews as well as documentary records), biographies of a number of significant figures, eloquent quotes from some of the key players. But this is actually a gorgeous, exuberant picture book. In her introduction, Martha Ansara, herself no mean cinematographer, says that the photographs were generally chosen not because of the ‘importance’ of their subjects but ‘because of the expressiveness of the image itself’. If this meant that some highly acclaimed cinematographers didn’t make the cut, I guess she was prepared to live with the fallout. From my perspective, the decision has paid off brilliantly: page after page, image after image, the book is a delight.

I’d heard of Frank Hurley (the first person to film Antarctica), Damien Parer and Neil David (war cinematographers, who died on the job), John Seale and Russell Boyd (whose names keep tuning up in credits of great mainstream movies), but would have been pressed to name many more. From the dedication page, with its list of 20 Australian cameramen who ‘lost their lives catching shadows’, presumably covering conflict, the book was a revelation and an education. There’s an image from 1906 of the Salvation Army Limelight  Department Staff, complete with slouch hats. There’s a naked ABC film crew, backs discreetly to the camera, shooting on a nudist colony in 1971. Another news crew wades, water up to their armpits, through a Papua New Guinea swamp in 1974 carrying a salvaged reconnaissance camera.

Plenty of TV news is here, and some commercials, but I was most captivated by the images from film shoots – Withnail and I (DOP Peter Hannan) or Driving Miss Daisy (DOP Peter Jannes), say – where the actor in full character  exists in a parallel world with the person focused on the task of making the image work. Or the ones from movies like The Tale of Ruby Rose (DOP Steve Mason) where the landscape was such a powerful presence, and here we see the crew, or perhaps just the director and DOP, going about the business of capturing it.  The effect is not so much to demystify the magic of the movies as to extend it.

I haven’t read the whole thing yet — I bought it as a birthday present for my son, and now I’m tempted to splurge and buy a copy for myself. It’s a wonderful book, but don’t take my word for it. It has its own web site, complete with sample pages. If that doesn’t whet your appetite,  I guess you  just aren’t into the movies