We drove out to Emu Plains yesterday to visit the Penrith Regional Gallery – the Art Student had had a lecture on Gerald Lewers and Margo Lewers, the sculptor and painter whose bequest formed the basis of the gallery, and as our friend Steven Vella was part of a show there, we decided to make the trek (all of 53 minutes, it turned out).

Curiouser & Curiouser, which includes work by James Blackwell and Peter Williamson as well as Steven Vella, is on display in the gallery that was the Lewers’ home. These three artists may not constitute a movement, but their work sits beautifully together. They all take objects from the natural world – feathers, seeds, leaves, twigs, bird bones, inflorescences – and make art from them. Peter Williamson has raised basket weaving to a high art. James Blackwell’s delicate, fragile lattices seem completely artificial until you look closely. And Steven Vella’s headdresses and bowls suggest ritual uses, and even though some have a funereal edge, they’re extraordinarily exuberant. The catalogue describes the work collectively as ‘detailed organic assemblages of remarkable beauty’.

That would have been worth the trip. But there was more. A Lego corner for young patrons featured a substantial mural created by students from a nearby public school, a version of a photograph in the main gallery (both pics taken on my phone – but you get some idea): 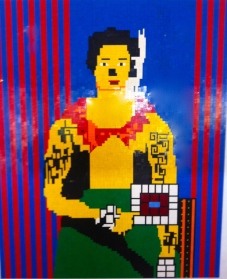 The fabulous image on the right is William Booth’s photograph of Manu Vatuvei, a New Zealand Rugby League player, dressed as a traditional warrior from his native Tonga. It’s part of Body on the Line, photographs of 13 League players of Pacific Island heritage as cultural warriors. This, and Heads Up in the next room, ten huge close-ups of Penrith Panthers players and fans taken by Craig Walsh and Josh Raymond within minutes of losing a major match, bruised and gutted, gave me a new respect for the qualities of elite sportsmen.

Nowhere does the gallery try to draw a connection between the meticulous, fine-tuned contemplative aesthetic in the old house and the heroic muscularity of the main gallery, but I’d love to see the various makers and their subjects chatting over canapes at a joint opening.