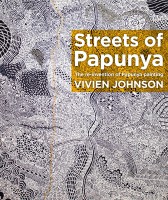 This is a gorgeous book full of dazzling images from Australia’s Central Desert. Its publication coincides with an exhibition of the same name at UNSW Galleries, which is showing until 7 November. If you can’t get to see the paintings the book is the next best thing.

The book is more than its images. It is also a story of Papunya the place and the artists who live there.

The word Papunya has entered the general Australian and perhaps world vocabulary as synonymous with the rise of contemporary Australian Aboriginal art in the 1970s. It was in the small, artificially created settlement of Papunya that Aboriginal men, under the tutelage and encouragement of Geoffrey Bardon, began to use acrylic paints to depict traditional designs for non-Indigenous viewers. The company Papunya Tula must be the most recognisable name associated with Aboriginal art.

But Papunya was there before Geoffrey Bardon arrived. And so was Aboriginal art. Albert Namatjira painted his last watercolours while living there, and many of the local men could imitate his style (but chose not to because he was from a different country). And there was art in Papunya after Papunya Tula relocated in the 1980s and many of those original artists moved to other settlements. The town remained, as beset by disfunction as many other Aboriginal settlements in the Northern Territory, its artists left to pursue their talent without an art centre or any substantial support.

The history of Papunya has been told many times, possibly most beautifully in The Papunya School Book of Country and History, created by Nadia Wheatley and the children and adults of Papunya in 2002. That’s nominally a children’s book, but like that other great ‘children’s book’, Maralinga: The Anangu Story (by the Yalata, Oak Valley Communities with Christobel Mattingley), it tells an important story from an Aboriginal perspective. Without glossing over the terrible realities the consequences of colonial policies, these books convey a sense of Aboriginal agency and  intelligence.

Streets of Papunya is not a children’s book, and at times it can be hard going because it assumes prior knowledge, or else a high degree of interpretive skill on the part of the reader. But Vivien Johnson tells a story that has grown from her relationship with artists who have remained in Papunya. They may have been sidelined by the departure of Papunya Tula, but they continued to paint, and now, with the establishment of Papunya Tjupi, they once again have infrastructure to support their creative work.

There’s a lot of nitty-gritty in the book: the details of how the artists have been supported with supplies of canvas and paints over the decades; the legal wrangling over ownership of the 14 paintings from the 1970s known as  Papunya Community School Art Collection; the role of white managers in helping artists break out of narrowly conceived commercial imperatives; the arduous four years it took to get a new Art Centre up and running after two decades of false starts.

There’s also some splendid revision of received history. For example, you may have thought, as I did, that those early Papunya painters didn’t include women because of cultural considerations. But no, it was because the white managers couldn’t see their way to stretching the genuinely limited resources to a whole new population of potential painters. The impetus to include women in the ranks of the painters came, often enough, from the old men. You may have thought, as I did, that it was the lawmen, men of high cultural influence, who began the contemporary art movement.  But no, the first Papunya painters were risk-takers, cultural innovators, whose showing of painted stories to non-Indigenous people won the approval of the serious lawmen only after it was seen to succeed.

There are many stories on this book of frustration and defiance and hard work and triumph. Vivien Johnson sums things up nicely at the end (the lines of verse at the end are from Billy Marshall Stoneking’s ‘Passage‘):

These artists of Papunya live their lives amid the residue of successive government policy and planning failures over the half-century of Papunya’s existence. … Art centres are for them a kind of oasis from that devastation, places where through tirelessly painting the stories in which their ancestors’ deeds are recounted for the delight and edification of whitefellas, the painters symbolically invoke the power of those ancestors, just as Papunya’s street signs now invoke its cultural and artistic heroes. Surveying the ruins of their colonisers’ attempts to bring them into the mainstream of Australian life, for which places like Papunya were originally created, they are a reminder of another force at work here, underpinning all endeavours in its various names:

… the Dreaming does not end; it is not like the whiteman’s way.
what happened once happens again and again.
This is the Law. This is the Power of the Song.
‘Through the singing,’ the old men say,
‘we keep everything alive; through the Songs,’
they say, ‘the spirits keep us alive.’

Streets of Papunya is the nineteenth book I’ve read for the 2015 Australian Women Writers Challenge.