This is a book that comes as 17 or so separate pieces in a box: little books, bigger books, concertina-folded strips, a board …  It might seem just plain gimmicky at first blush. But no. It turns out to be completely captivating.

The title is a pun: to read this book you have to build its stories, and a good deal of it is tales from a three-story building. Because of the nature of the beast, every reader will encounter the stories in a different sequence. Either I was very lucky, or the sizes and heft of the components tend to guide the reader’s choices, but I felt that I was reading a discontinuous but coherent narrative.

The book I read has five narrative threads, each with a central character: the lonely woman with a partially amputated leg who lives on the top level of an old building in inner Chicago; the unhappily married couple on the floor below her; the old woman who owns the building, and who lives on the ground floor where she has lived her whole life; a bee who is briefly trapped in the house; and the house itself. These stories connect and separate the way the lives of people who live in an apartment building do. Eventually, one of the stories emerges as the central one and the others slip away.  (I imagine that if you read in a different sequence, the life after the building – which to me was a long aftermath – will seem like the main story, with the life in the building as flashback.)

It’s not exactly a cheery read: most of the characters spend most of their time sad, lonely, bored, and generally dissatisfied. Youthful ambitions fail to materialise, youthful mistakes come back to haunt. But the telling is miraculous. Really. Once I got over my initial reluctance to engage with this box of stuff, I was completely gripped. The ending, or rather my ending, is devastating but not as nihilistic as I had feared. Chris Ware’s art is precise and spare to the point of primness, yet communicates meaning through the slightest variation – a flower stem bends slightly from one frame to the next, a facial expression changes subtly. Here’s a sample page, though I don’t know how much you can tell from it. It’s part of a day at work for the woman from the top floor, an aspiring writer and artist who works in a florist’s shop: 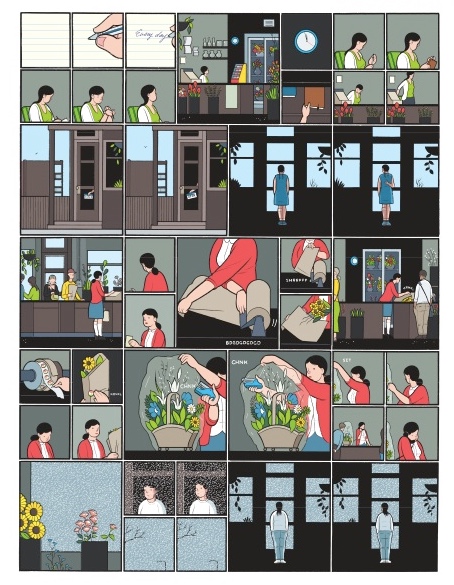 This entry was posted in Books and tagged Chris Ware, comics. Bookmark the permalink.