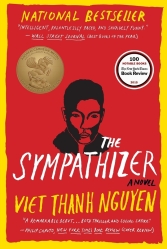 In the early pages of The Sympathizer the narrator is working for a Vietnamese general in the last days of the US–Vietnam war. A CIA man gives him a book:

I took care to peruse the book’s cover, crowded with blurbs so breathless they might have been lifted from the transcript of a teenage girls’ fan club, except that the excited giggling came from a pair of secretaries of defense, a senator who had visited our country for two weeks to find facts, and a renowned television anchor who modelled his enunciation on Moses, as played by Charlton Heston.

This little bit of mockery of US publishing practices is given an ironic bite by the blurb overkill of the book in which it appears: front and back covers are so crowded with flattery that an extra false front has been added to take the overflow, then inside the book there are six pages of praise before the title page, and then 15 pages up the back of commentary from the author in the form of an essay and an interview.

Count me among the hardy souls who decided to read the novel anyhow.

The sympathiser of the title, who is the protagonist–narrator, is a Vietnamese double agent, a US-trained member of the South Vietnamese secret police and a spy for the Vietcong. He takes part in some key post-war events: the last-minute escape from Saigon by members of the South Vietnamese armed forces; the making of a brilliant film that, for all the pretensions of its director, portrays the Vietnamese people as subhuman (and in an author’s note, in case we missed it, is identified as a fictionalised analogue to Apocalypse Now); a re-education camp under the Communist regime; covert assassinations by rightwing refugees in the US; a pathetic attempt to invade Vietnam years after the war is over; and eventually the humiliation of being classified as boat people. While he remains in two minds (a notion that the narrative plays with in a number of ways), his closest friends are an anti-communist zealot and a staunch upholder of the Communist regime.

It’s a historical novel, with an instructional agenda which it fills well. It also spins a gripping, episodic yarn, and offers a sharply satirical perspective on the Vietnam War and US politics in general. For example, a Republican Congressman speaks at a Vietnamese refugee wedding feast, in rhetoric that uncannily foreshadows the vision of the current President (page 119):

… your soldiers fought well and bravely, and would have prevailed if only Congress had remained as steadfast in their support of you as the president promised. This was a promise shared by many, many Americans. But not all. You know who I mean. The Democrats. The media. The antiwar movement. The hippies. The college students. The radicals. America was weakened by its own internal divisions, by the defeatists and communists and traitors infesting our universities, our newsrooms, and our Congress.

There are some neat epigrams:

Americans on the average do not trust intellectuals, but they are cowed by power and stunned by celebrity. (page 254)

That kind of wit is hard to pull off without sounding just a bit smug and/or glib, and Viet Thanh Nguyen doesn’t always succeed.

On the whole I found the book a bit of a slog, not without its rewards, but also with some longueurs.

This entry was posted in Books and tagged Novel, Viet Thanh Nguyen. Bookmark the permalink.