Last night (that is, Monday 22 May), the New South Wales Premier’s Literature Awards were announced at a cocktail event at the Art Gallery of NSW. The award recipients collectively took home a total of $310.000. I have attended this event in the past, but for a number of years now I’ve settled for watching from afar, depending on the generosity of tweeters for glimpses of the event. Here’s what I garnered this year, depending mainly on the hashtag #PremiersLitAwards. Links are mainly to either my blog posts about books or the State Library’s listings of the awards.

Uncle Allen Madden started things off with a ‘wonderful’ Welcome to Country. Joanna Murray-Smith gave the keynote address. Don Harwin, Minister for the Arts, spoke briefly. Gladys Berejiklian gave the Premier’s address. No tweet quoted any of them as saying anything memorable – which I attribute to the tweeters not realising that there were people out here hanging on their words.

Hamish Mc took the mic. His first act was to pay a ‘lovely tribute to the late Dr Rosie Scott’, recipient of the special award last year. His second tweeted utterance was to promise to tackle anyone who made too long a speech. This may be the reason that hardly a word from any of the recipients was tweeted from the room. A pity, because the acceptance speeches are part of the joy of these evenings.

The serious business of handing out the prizes began with the Nick Enright Prize for Playwriting. My money was on The Drover’s Wife by Leah Purcell. I hadn’t seen any of the other shortlisted works, but they would have had to be bloody brilliant to snatch the prize. They didn’t.

The Betty Roland Prize for Scriptwriting was shared by The Code, Series 2 Episode 4 by Shelley Birse and Down Under by Abe Forsythe. No argument from me, though a citizen of Sutherland Shire, the setting of much of Down Under, had dimmed my enjoyment of that movie with some pretty telling information about its lack of attention to detail. (I wonder if anyone from the Shire is on the judging panel.) .

They were now zooming through the prizes. The Patricia Wrightson Prize for Children’s Literature went to Iris and the Tiger by Leanne Hall, and the Ethel Turner Prize for Young People’s Literature to One Thousand Hills by James Roy and Noël Zihabamwe.

Peter Boyle’s Ghostspeaking won the Kenneth Slessor Prize for Poetry, and he had the distinction of being quoted on Twitter. He thanked Vagabond Press for ‘allowing him to have the length he needed to express himself’.

I’m glad I wasn’t a judge for the Douglas Stewart Prize for Non-Fiction, because i would have found it hard to pick between Talking To My Country by Stan Grant, The Art of Time Travel: Historians and Their Craft by Tom Griffiths and Everywhere I Look by Helen Garner. It turned out the judges chose Our Man Elsewhere: In Search of Alan Moorehead by Thornton McCamish, which must be a fabulous book.

About now, @RobinElizabee tweeted, ‘So many authors were so confident that they wouldn’t win that they didn’t prepare a speech. Imposter syndrome is real.’ Ah, the humility!

The UTS Glenda Adams Award for New Writing went to Letter to Pessoa by Michelle Cahill.

The Christina Stead Prize for Fiction, one of the big ones, went to The Museum of Modern Love by Heather Rose. I haven’t read this book but the Emerging Artist has been going on about it for months, so the judges’ decision is heartily endorsed in my house.

At this stage, the Premier handed over the Distributor of Bounty role to Ray Williams, Minister for Multiculturalism, He spoke and presented the next three awards.

The biennial Translation Prize went to Royall Tyler (who translates from Japanese). This year for the first time, there’s a second translation prize, the Multicultural NSW Early Career Translator Prize, which was won by Jan Owen.

Of the contenders for the Multicultural Award NSW I’d read only The Hate Race by Maxine Beneba Clarke (aka @slamup). I was very happy to see it win. @JulieKoh tweeted a photo of the book’s publisher Robert Watkins, a very white man, accepting for Clarke, a very black woman. On the screen above him his words are being typed: ‘I am very clearly not [her]’, the only laugh of the night that made it out to the Twitterverse. It was followed by tears: @RobinElizabee tweeted, ‘Robert Watkins reading of @slamup’s speech had him and all of us in tears. Let’s do better.’

Now @thatsunilbadami, earlier rumoured to be hosting the event, appeared on Twitter to congratulate Maxine Beneba Clarke ‘for her powerful, inspiring & accomplished memoir’. Western Sydney solidarity is a beautiful thing.

The People’s Choice Award went to Vancouver, the third novella in the series Wisdom Tree by Nick Earls, who shortly afterwards tweeted this photo with the words, ‘People! Look what you did! Thank you.’ 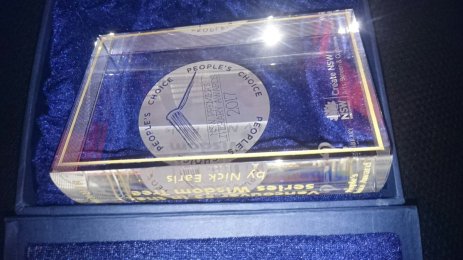 The evening ended with the big prize: Book of the Year went to The Drover’s Wife, the first play to win this award. I wish I’d been there to applaud. The State Library tweeted video of Leah Purcell’s completely charming acceptance speech (if you watch, be sure you stay to the very end). ‘I’m speechless. Just as well I got my thankyous in first, eh?’ You have to love the contrast between her demeanour and the completely appropriate tone of the judges’ report as quoted in today’s Guardian:

Which is part of why I love these awards evenings. People of whose achievements I am rightly in awe step up to the podium one after another and reveal themselves as people just like you and me, even though they are still awe-inspiring. Who knew?

Added later: Lisa Hill has a post on the awards that gives links to reviews, her own and other people’s, of almost all the winners, plus the shortlisted titles. Click here to get there.