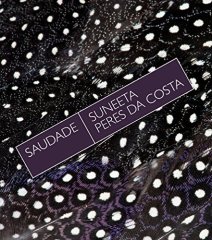 I recently spent a wonderful couple of weeks in Portugal, visiting countless galleries and museums, walking the Caminho Portuguès, being blown away by the neolithic site at Evora. It’s a great place to visit. One cause for unease, though, was that at least in touristy circles conversation about Portugal’s past generally glossed over or completely ignored unsavoury topics: we heard quite a lot about the Age of Discovery, and very little about colonisation and slavery.

Saudade, a novella in Giramondo’s Shorts series (whose previous titles include Luke Carman’s An Elegant Young Man and Michael Mohammed Ahmed’s The Tribe), offers a welcome counterpoint to that silence and evasion. It is set in Angola, beginning in 1961, the year the Angolan War of Liberation began, and ending with the declaration of Angolan independence in 1975. It’s not a fictionalised account of the struggle of those years, but the coming of age story whose protagonist-narrator Maria-Cristina, born in Angola to Goanese parent, is three years old in 1961. The war and the process of decolonisation are rarely foregrounded: they affects the characters’ lives profoundly but remain in the background.

For the benefit of readers who know as little about Portuguese culture as I did three months ago, saudade is a pretty much untranslatable term described by Wikipedia as ‘a deep emotional state of nostalgic or profound melancholic longing for an absent something or someone that one loves.’ Wikipedia continues, ‘Moreover, it often carries a repressed knowledge that the object of longing might never return.’ It’s an emotion that looms large in Portuguese culture dating back, we were told on a walking tour of Lisbon, to the collective feeling of mourning and messianic hopes following the death of King Sebastian in a sixteenth century battle in northern Africa.

In this novella, it hovers over everything: it could refer to the yearning for independence (our protagonist earns the wrath of a ‘teacher from Coimbra’* when she repeats what she has heard on the radio and calls Bartolomeu Dias ‘the invader’); the general sense of dislocation (Portuguese is the official language, but the parents sometimes speak their mother tongue of Konkani, while African characters speak Creole or Kimbundu, which the protagonist doesn’t understand); a sense of not having a place in the world (which is explicit in the case of the young man who is Maria-Cristina’s first real sexual partner); and perhaps in a more diffuse way in a general sense that Maria-Cristina is telling her story as a way of reaching for some understanding of her past, some grounding.

Christos Tsiolkas said on radio recently that when he was young he read for pleasure, but came to understand that sometimes one could read to be challenged. I think of Saudade as a challenging book. Each of its eleven chapters is printed without paragraph breaks, and only sometimes do ellipses indicate where a paragraph would be in a conventionally laid out narrative. We learn Maria-Cristina’s name in Chapter 8. The elements of Angolan geography and history are not glossed. Chapter 2 begins:

The Brazilian mutineers from the Santa Maria did not get to the harbour of Luanda. Captain Galvâo did not start a revolution. None of the prisoners that escaped from the Sâo Paulo penitentiary tapped on our door, entreating us to harbour him as a fugitive. Yet in the days after the revolt at Baixa de Cassanje, there was a telex to say that a client of Papá’s, a German cotton-farm owner, had been killed in a northern reprisal.

That’s surely an invitation and a challenge to readers who (like me) don’t know anything about Angolan history to do a bit of research. I now know that three separate events in January and February 1961 marked the beginning of the Angolan War of Liberation.

Responding to invitations like this (and there are many throughout the book) seems to be a necessary part of reading the book: they ground the narrative in a particular time. At times they more questions than they answer. For example Maria-Cristina has an unsettling sexual encounter with a soldier in a movie theatre, and names the film they are watching. It’s La chinoise. Well, that’s a movie made by Jean-Luc Godard in 1967. If you allow a couple of years for dubbing and shipping, Maria-Cristina is probably about 11 years old, and by doing this calculation we realise that it’s a story of child sex abuse. That’s not how Maria-Cristina narrates it, though. The question I couldn’t shake, though, was: what self-respecting Angolan soldier would go to see a French movie about a house full of students arguing about Maoist politics? I’m not saying this was a mistake. It’s clearly deliberate, and it’s part of the generally unsettling nature of the book. Nothing is simple, nothing is straightforward in a complex world the colonised are fighting back and searching for solid ground.

Saudade is the sixth book I’ve read for the 2018 Australian Women Writers Challenge. I am very grateful to Giramondo for my review copy.

• A city in Portugal