I don’t have a lot of time for blogging just now – a wedding this Saturday and the small matter of moving house by mid January are adding significantly to the seasonal distraction load. I’ve barely finished this book ahead tonight’s Book Group meeting. But I’ll stick to my usual Before and After format.

Before the meeting: This is a brilliant book. Delia Falconer combines colonial history, personal reminiscence, reflections on recent headlines (Bogle and Chandler, Anita Cobby, the Cronulla riots, Abe Saffron …), literary discussion (mainly of Patrick White), physical description (especially of  jacarandas), gossip about and from her friends (including a couple of unforgettably seedy images), and any number of other elements in an eminently readable and erudite extended essay. It may at times strain for effect (‘the light is unquestionably Sydney’s,’ she writes of a scene in the movie Bliss, ‘saturating, and warm, but also muted and inconstant’), the effect is generally worth the strain. She makes room for many other voices – William Dawes (Kate Grenville’s fiction about him, The Lieutenant, is tactfully not mentioned), Ruth Park, and many others, including eccentric photographer-clergymen, eloquent diarists and letter-writers.

The book is frankly personal, and by implication invites readers to reflect on their own experience of the city. I first visited Sydney in the 1950s with my parents, and remember seeing Arthur Stace’s ‘Eternity’ chalked on the kerb at Hyde park. I’ve lived here since 1967, the year I turned 20 and Delia Falconer had her first birthday. Where she lived on th lower north shore and then in student houses in Newtown and thereabouts. I lived in Dundas for three years and then moved to the inner west – Glebe, Leichhardt, Annandale, interrupted by a couple of years in lower Paddington. There’s plenty of overlap, but I don’t think my shared house days were ever as disgusting as she makes hers out to have been. I love her sense that Sydney is a city with something unacknowledged always pressing for recognition. Her discussion of the interplay of hedonism and wowserism is as good as any I’ve read. I’m persuaded by her reading in Kenneth Slessor’s ‘Five Bells’ a displaced sense of the dispossession of the Eora people. 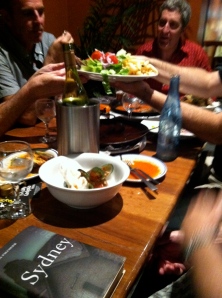 We had an animated discussion. Only one of the seven of us was born in Sydney, and he was born in the inner west more than 10 years before Delia Falconer, but we’ve all lived here for decades, and a good bit of the evening was taken up with shared reminiscence. The book doesn’t mention Bea Miles, gives the Push only a passing glance, doesn’t talk about theatres past and present, or the Depression – but it didn’t need to. One of us had put his name down for a walk in the Tank Stream after reading about it; another had done the walk and recommended it. We spent a lot of time reminding each other of bits we’d particularly liked, and generally agreed it was an excellent choice for the Group. The White Cockatoo in Petersham likewise met with general approval as the venue for our end of year meeting, though our appetites weren’t equal to the gigantic helpings of food.

This entry was posted in Book Group, Books and tagged Delia Falconer. Bookmark the permalink.