My trip to Turkey 6: Kas

Today is a travel day: three hours in a hired bus that took just the 13 of us, then an hour or so in a vast bus station in Antalya and five hours in local transport (to use Intrepid’s language), so ample time to type this up in pages on the iPad, to be uploaded next time we encounter WiFi. You can do lots of things by holding down the iPad’s screen keys, but in Turkish, though you can get ç, ö and ü, you can’t give g a little crescent hat or s a cedilla. So I hope Kas will forgive me for spelling it with a naked s, to rhyme with mass rather than bash.

We arrived in Kas two days ago in the late morning, and had time for a short orientation walk and lunch before heading off on a boat to spend a little more than 24 hours on the water. It’s a friendly town: while a couple of us were hanging about before lunch an almond vendor offered us each a single nut, with no hint of pressure to buy. It’s a culturally diverse town: the midday call to prayer summoned an overflow crowd to the little mosque near the main square where bare-kneed and -shouldered women caused no stir at all; the tiny Greek island of Kastellorizo, known in Turkish as Meis, looks to be within swimming distance, and people from there shop in Kas – I heard a lot of yasou in the street, among Turks. It’s a town that wears its antiquities lightly: a broken Lycian sarcophagus stands catty-corner to a carpet shop on one intersection and the small Lycian theatre a short walk out of town has been restored and, we’re told, is used for performances.

But all but one of us – that one being the Art Student, who is vulnerable to acute motion sickness and chose to enjoy a day of solitude – were out of there before we had time to take in anything much of all that, chugging away from the sweltering land onto the cool, clear Mediterranean.

We dropped anchor and swam. We set off again. We lazed around on our day beds. If we used every available space there was just room for the twelve of us, plus the captain and single crew member–cook, to lie down above deck. 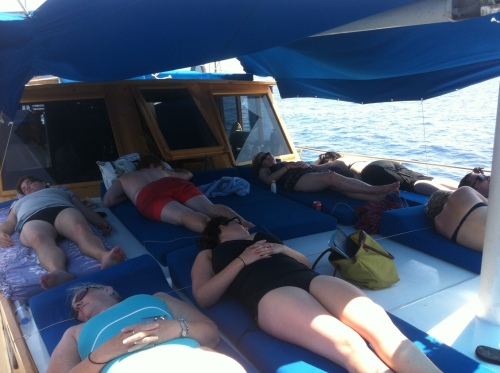 We visited a shallow cave where people had hidden from pirates in the second century of the current era. We dropped anchor and swam again, in a sheltered area where, according to Burak (our Intrepid Leader) pirates and war fleets had been anchoring for millennia. We had delicious food for dinner. We resisted the captain’s urgings to go to something called the pirate bar, where sometimes hundreds of Aussies sit around drinking. Those of our group who drank were quite happy to do it in our tiny group of mostly-Aussies. The captain went off by himself, slightly crestfallen at his lack of company and, we guessed, lack of commission. We then lay down beneath the stars in the kind of proximity that smacked of childhood sleepovers, ready to be lulled to sleep by the gentle undulations of the sea.

It was not to be. Of the 20 or so boats anchored in this space, ours was the closest to the pirate bar. I had been worried that my snoring would disturb my fellow travellers. In fact, as I was one of perhaps three who managed to go to sleep before the relentless thumping pirate music stopped AT THREE IN THE MORNING, there were plenty of witnesses to my snoring, but no one complained of it. I woke up to a stunningly beautiful sunrise and slipped quietly into the water for a dip, blissfully unaware that just about everyone else was about to greet the day in moods ranging from unmitigated fury to exuberant outrage. My favourite line was, ‘Finally it stopped, and I’d just got to sleep when the f**kin sun started shining in my face!’ of course, the captain had told us he would put up a shade to the east, but either he’d forgotten about that when he climbed back on board (an event many people attested to have heard), or he added to his earlier feats of poor judgement and assumed that anyone who wasn’t interested in the Pirate Bar would obviously want to rise with the day.

We swam, we lazed, we read our books (Jack Kerouak, Jo Nesbo, Jane Austen, Anna Funder, Bruce Beaver), we listened to one another’s wailing and gnashing of teeth, we ate beautiful food for breakfast, we swam again, and the mood generally improved.

Our one landfall was the village of Kaleköy, formerly part of the ancient Lycian city of Simena, where some of us climbed to an castle–museum with a tiny little theatre and a spectacular view, a whole swathe of Lycian sarcophagi, and just outside its gate some excellent ice cream ‘made by Mama’. After a little swim, we chugged across to the facing island of Kekova, where as we approached the scattered rocks on the hillside resolved into the remaining walls of this part of the ancient city. Earthquakes in the third and fifth centuries CE (but don’t quote me) had destroyed the city, sinking most of it.

We anchored one last time, ate delicious food for lunch. One of us let the captain know we were generally unhappy about being parked so close to the noise the previous night, and he seemed to be genuinely surprised. We swam some more, even did a little synchronized swimming and competition diving, and headed for solid land, where the Art Student’s dream of sitting and drawing in blissful solitude had been thwarted by extreme heat (what a difference it makes to be out on the water!) and a lack of a shady place near drawable things.

I don’t know who the Lycians were. Was the unfinished temple at Erice in Sicily theirs? Can Baruk be right that the squabbling relationship between Zeus and Hera in Greek mythology is a vestigial reminder of the long-forgotten uneasy blending of the goddess-centered Lycian and the male-dominated Hellenic cultures? Whatever. It seems like most visitors to this part of their ancient domain just want to drink alcohol and listen to loud music.

This entry was posted in Travel and tagged Turkey. Bookmark the permalink.