I read this book in Istanbul, mainly in brief snatches while waiting in queues or similarly engaged. To lift a phrase from one of its poems, (‘this book will change your life’) you could say it was ‘the necessary unwelcome weight in [my] backpack’, though as it’s a very slim volume it was hardly unwelcome.

As one of the striking features of Istanbul in this hot summer is the length to which some tourists go to conceal the female body, I was delighted by the sweet, witty female sensuality in the poems of the book’s first section, ‘Body Parts’. When I say sweet, I invite you to think of mangoes rather than sugar cubes or apple tea – ‘slicing slivers of yielding flesh / that fill my mouth with / lusciousness / and after-tang’, which of course is about actual mangoes. I would have liked ‘the white dress’, from a later section, anywhere, but its tale of childhood rebellion gained an extra poignancy from the proximity of so many young women sweltering obediently beneath layers of black cloth:

There are poems about growing up female, having a female body, female friendships, mother–daughter relationships. And quite a bit that doesn’t fit easily into that field. The titles of the book’s other sections give an idea of its range:

laboratory days, which includes the magnificently named ‘the biosynthesis of 3-nitropdropanoic acid in penicillium atrovenetum’

the leaping spark, about books and sex

short-circuit, which includes ‘the white dress’ and other poems about childhood, reproduction, same-sex attraction and violence against women (yes, I’m not sure what the common thread is there either!)

the uncertain human, containing the title poem and eight other short, strong poems, in which again the body asserts itself:

I respond to these poems as if meeting an old friend for the first time. I have met Tricia Dearborn once or twice, but that’s not what I mean. I think it’s the way the poems refer back, fairly obliquely, to a Catholic childhood, and turn their back on it, joyfully asserting the materiality of humanness.

My fabulous niece Edwina Shaw recently had a Sydney launch of her YA novel Thrill Seekers. Here’s a video of her reading a chapter – taken, she says on her blog, by her children:

We’ve settled into a daily routine in Istanbul: after a hotel breakfast, we head out for the major excursion of the day. Then we’re back to the hotel for a couple of hours snoozing, reading, respectively drawing and blogging, with perhaps an excursion to the teras for a slice of cake proudly baked and offered for free by the young woman who sometimes helps at the front desk. We go out again for dinner some time between 7 and 9, which generally involves a lot of strolling, a little getting lost, continuous people and animal watching, intermittent admiration of antiquities (the aqueduct, Constantine’s column, the minarets of Sultanahbad), occasional recognition of another loan word in Turkish (like kuafor for hairdresser or tuvalet, pronounced toilette, for toilet), and all that. Then it’s back to the hotel for some TV, always looking for the moment in a dubbed US or UK show when a bright squiggle turns up to mask the presence of a cigarette.

Yesterday’s main excursion was to Dolmabahçe Sarayi, the palace that replaced Topkapi Sarayi as the residence of the Sultans and their wives in the 1850s, and the place where Kemal Ataturk died in 1938. We’d intended to visit it on Sunday but after standing in the queue for half an hour or so without making much progress we decided to come back when it was less crowded. Hah!

We arrived at 10 past 10 in the morning. Queue No 1, for the security check, was a non-event. Queue No 2, to buy tickets, was less than half the length of Sunday’s. But it moved just as slowly. Here I am soon after joining it. 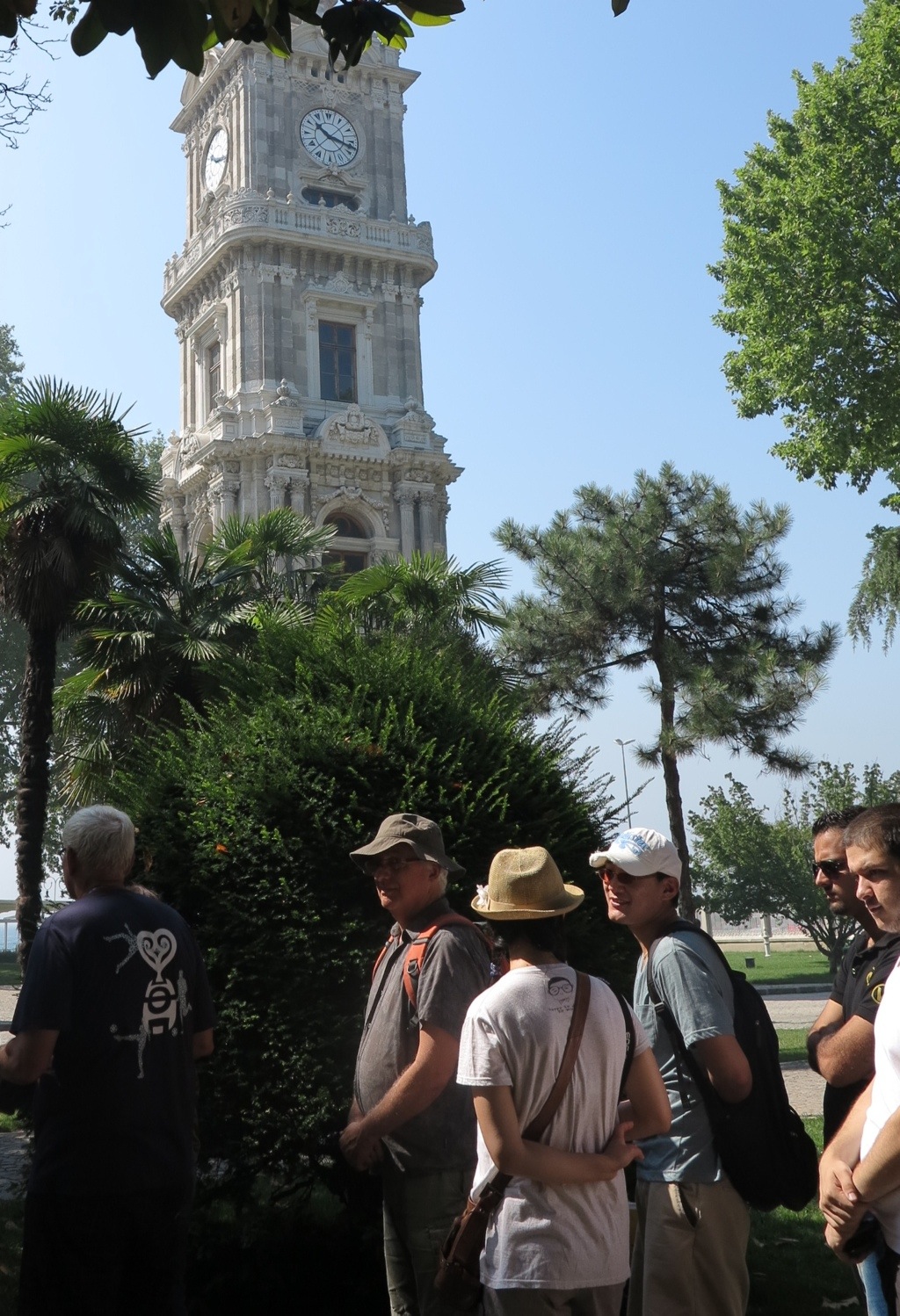 And here I am half an hour after that, with only ten minutes or so to go, just entering the roped section: 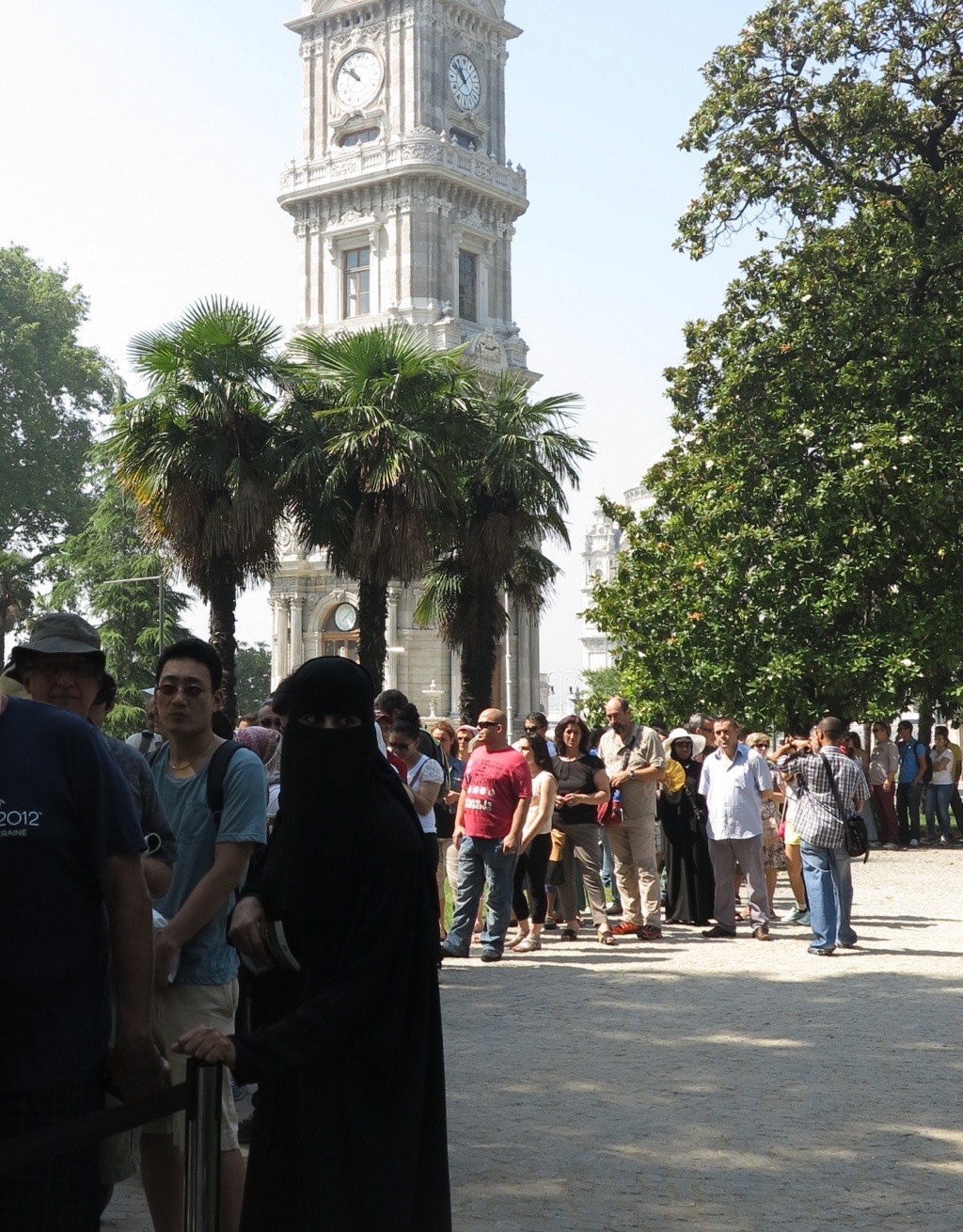 Note the woman swathed in black with a hand resting on the bollardy thing. If you are ever in a queue and she turns up beside you, challenge her. If she says demurely, ‘My husband,’ pointing with her eyes toward the front of the queue, DO NOT accept the implication that her husband is up ahead between the ropes. DO NOT LET HER PASS. Her husband has sent her in to save them both the 50 minute wait. I suppose I should add that if you do courteously allow her past, and advise the people immediately ahead of you do do so as well, when you realise that despite her appearance of a pious Muslim woman she is actually a lying scumbag of a queue jumper, you probably shouldn’t shout after her, ‘Madam, you are a liar. You lied to me!’ even if you’ve observed on Tripadvisor that Saudi tourists call hotel staff they don’t like liars quite a lot, so you know the term has currency. Your companion is likely to find this behaviour embarrassing. But of course, you’d have no way of knowing if it was the same woman. I could recognise her by her large brown bag, and noted with grim satisfaction that her male companion was one of the many men accompanying women sweltering in black to the eyeballs who found the weather far too hot for long trousers.

Queue No 3 turned out to be a pack:

On the left, the sign said, were tour groups, on the right individual visitors. Another sign that was invisible until we reached the top of the stairs said that no individual visits were allowed: we weren’t queuing at all, we were waiting for the English-language tour at 11.35.

The tour turned out to be pretty much a moving queue, Queue No 4, as a hundred or so of us, many of whom spoke very little English, followed the guide, whose English was largely incomprehensible anyhow, through vast room after vast room, each furnished with great opulence.

Queues No 5 and 6, for the harem, were a repeat of Nos 3 and 4, though shorter and more comprehensible respectively.

Perhaps you’ll forgive me for going on so much about the queues if I quote a chap we’d met somewhere along the line: ‘After all that it was all the same, room after room of kitsch!’ I thought he put it well.

The man marshalling the harem queue ushered the Art Student and me to seats off to one side, probably out of consideration for our grey hair (have I mentioned that we’ve met with the most extraordinary generosity and kindness on this trip?), and said that audio guides were being developed and some year soon all this queuing and herding would come to an end. Compared to places like Iran, he said, Turkey is doing brilliantly, but it is still modernising, not there yet.

There was a weird pleasure in seeing how the other 0.1 percent lived, and it was eerie to peer into the queen mother’s room where Ataturk died, but really, I’d rather have the three hours of my life back and the 80 euro it cost for two of us. Your mileage may vary. If you do go, I strongly recommend you do it with a tour group.

Oh, the best thing about the visit, apart from the drama with the lady in black, was a performance by a military band in full Ottoman drag and fierce Jannisery glares, which we could have seen for free.