I’ve been sick with a cold since last Monday, and going stir crazy. Perhaps unwisely, I’ve struggled out of the house two nights this week to go to book launches.

The first, on Monday night,

was a double launch at Gleebooks – of the tenth issue of Rabbit, a Melbourne-based ‘quarterly journal of non-fiction poetry’, and XIII Poems by Jordie Albiston, the first in a series of booklets to be published by the journal. Both books are beautiful to look at and to hold, and I’m looking forward to reading the copies I bought on the night. Among other tempting morsels, the Rabbit offers poems by Julie Chevalier, Jordie Albiston, B R Dionysus, Lachlan Brown (to name the poets whose work I know), photographs, an essay, an interview and reviews, including one by A J Carruthers of two books I’ve loved, Jordie Albiston’s Book of Ethel (blog post coming soon) and Pam Brown’s Home by Dark (blog post here). And I’m fast becoming a Jordie Albiston fan, so I’m looking forward to reading what she calls orphan poems.

There were 17 people in the upstairs room at Gleebooks for the launch, of whom 8 spoke or read, all interestingly, and one or two others were part of the team who had flown up from Melbourne for the occasion. Jessica Wilkinson, Rabbit‘s founding Editor-in-Chief, graciously described it as an intimate affair, and urged us to take some grapes or cheese home in our pockets since the modest catering was clearly far in excess to requirements.

Whatever the cause for the poor turn-out, the launch was convivial, with plenty of humour about poets becoming members of the Warren, etc, and much joy in language used with precision and passion. I was glad I’d struggled up from my sickbed to put a bum on a seat and at least half a mind into the room.

As a segue, I’ll mention that at least one of the speakers mentioned their students, and one poet explained that she wasn’t reading her poem from the Rabbit because it was too much a ‘page poem’.

The next night’s launch was a completely different affair. The Last Conversation is an anthology of poems that have been read at the Bankstown Poetry Slam – that is, a collection of spoken word pieces attempting the transition to page poems under the guidance of slam co-founder and anthology editor Ahmad Al Rady.

The monthly Bankstown Poetry Slam has grown in the year of its existence into the biggest slam in Australia. I’ve never managed to get there, and if last night’s event is any indication of the nature of the experience, I’m missing out on something excellent. Ahmad Al Rady and his co-founder Sara Mansour were fabulous MCs – charming, witty, self deprecating and lavish in their appreciation of others. As many as 10 poets performed: a militant hymn to Gandhi and Mandela (timely, though obviously the poem was first performed when Mandela was still alive); cries from the heart from young men against violence against women; a disturbing piece about cutting into flesh after which the poet reassured us that she was not a serial killer or self-harmer but a surgeon; a passionate piece about the detention of asylum seekers; two sisters mining the rich field of sibling rivalry and sibling support.

The theatre at Bankstown Arts Centre was full to capacity,mainly with young people dressed in their best, as if for graduation. The audience whooped, cheered and (during the readings) clicked. It was a huge, enthusiastic celebration not just of the slam and each other, it seemed to me, but of what can happen when language is unleashed. At the start of the evening, Sara Mansour described how the Bankstown slam had started. It was laziness. She and Ahmad were tired of driving all the way into the city for poetry slams. Bankstown needs its own slam, they thought, and hunted around until Tim Carroll, the generous and welcoming CEO of BYDS (Bankstown Youth Development Services) gave them a home. At the end of their first year, she said, she realises they were wrong on two fronts: running a slam in Bankstown was a lot more work than driving into the city once a month; and Bankstown didn’t need a poetry slam – poetry needed Bankstown.

(By way of full disclosure: I played a small consultative role in the editing of the anthology.)

Added later: This snap I took with my phone at the end of the evening shows something of the mood. These are the poets who read plus some others who are in the book. 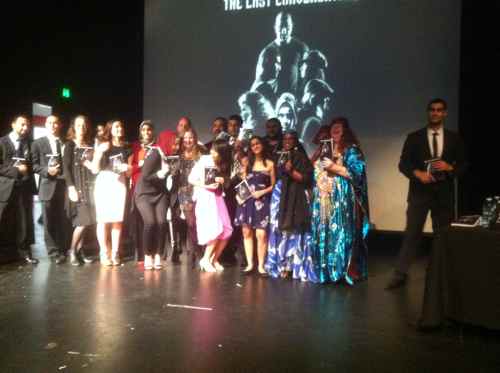