More of Swapna Dutta’s Juneli, plus my Sonnet No 1 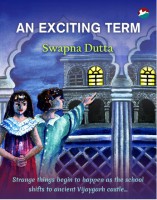 Swapna Dutta’s serial about a girl named Juneli who goes to boarding school was first published in the English-language Indian children’s magazineChildren’s World between 1978 and 1985. The serial proved very popular with young readers, and in the early 1990s HarperCollins published three Juneli books. This year the stories have found another lease of life as CinnamonTeal brings them out in three ebooks. All three books include the illustrations that Swapna’s daughter Sawan, then still a teenager, drew for the HarperCollins books, and the cover images are also Sawan’s (which were not used as covers of the print edition).

When I wrote a blog post about the first book, Juneli’s First Term, I hope I communicated how charmed I was by Juneli’s benign experience of boarding school. That benign quality continues in these books. There are scrapes and japes, mysteries and adventures in a setting that owes equal amounts to the pre–Harry Potter boarding school genre and Swapna’s own childhood experience at an English-speaking boarding school run for Indian girls by Carmelite nuns. Juneli now knows the ropes and has earned the respect and affection of most of her classmates, and the not-quite-enmity of a couple of snobbish malcontents. A kitchen mishap from the first book is a continuing source of embarrassment and comedy, and now we hold our breath each time there is a cooking exercise.

If you have a taste for boarding-schools stories or if you’re looking for a gift for a young person with such a taste, and want to add a little Indian flavour to your/their reading, I recommend these three little books.You can buy them from http://www.dogearsetc.com/. They are very reasonably priced by Australian standards. (I received complimentary copies, and Swapna is a friend.)

Moving right along: for the last few years I have set myself the task of writing 14 sonnets for the blog in November. Here goes with Sonnet No 1 for 2014, inspired by the Juneli books, along with Sugata Mistra’s wonderful TED talks maintaining that schools are an obsolete tool of empire, and Matilda the Musical which I’ve just seen on Broadway with its monstrous Miss Trunchbull, who couldn’t be more different from Juneli’s kind Mother Benedicta.

Sonnet No 1
Knead memories to make art. Punch, pull
fold, punch again, let stand, then bake.
So Dahl’s tormentor became Trunchbull,
real nuns did Swapna’s teachers make.
Both real schools served empire’s agenda.
Both fictions, one harsh, one most tender,
resist. Matilda, Juneli,
are naughty as they need to be.
In school, by monster or sweet mother
we’re taught to play our ordained parts,
ignore the whispers of our hearts,
but if we reach for one another,
each one giving what she has,
that may be good enough for jazz.