Tl;dr: I binged on the last nine volumes of Bill Willingham’s witty, edgy, intelligent, original stories entwined with twisted versions of fairytales. Mark Buckingham and a host of other artists serve the story brilliantly. While catering to the bloodlust and other lusts of ‘grown-up’ comics readers, this huge work does what the best fantasy does, makes us think about what it means to be human – with a particular emphasis on power struggles. But really the story is the thing.

Fables is a long-form story whose telling spanned 13 years, 150 individual magazine comics, and 22 compilation volumes. I’ve written about earlier volumes here, here, here, here, here and here, and have just finished a most satisfying binge-read of the last nine volumes in less than two weeks. What follows here is a spotty recap. 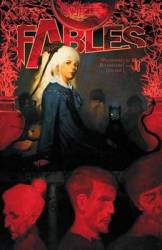 In Volume 14, Witches, the narrative picks up with new coherence and energy after a bit of stumbling and crossing over with spinoffs after the halfway mark, when the great battle that had been stewing from the start had been fought and won, and a new, more dangerous enemy unleashed (shades of ISIS rising from the ashes of Saddam Hussein).

Bufkin, the ape librarian who is a close cousin of Terry Pratchett’s Discworld librarian, begins his transformation into a revolutionary hero whose feats appear as a B plot until his apotheosis as a Hanuman-like figure in Volume 20. Here, he is still bookish, as his friend the magic mirror testifies to Baba Yaga, Bufkin’s antagonist in this volume: 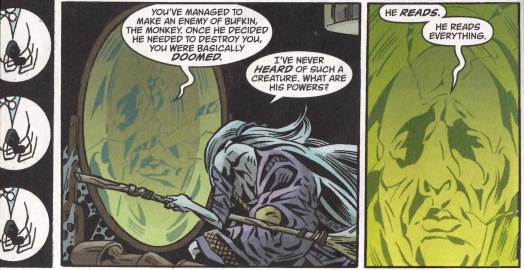 Totenkinder, the powerful ancient witch, becomes even more fearsome, and transforms into a gorgeous young witch (clearly about to become a heroine, as heroines in comics must be young and gorgeous). Ozma, little-girl in appearance, vast in ambition and witchy power but fortunately on the side of good, moves toward centre stage. And Geppetto, the conquered Adversary, begins his long attempt to regain power, in this book with two naked wood spirits as his protectors. As always, the family life of the Fables continues: Beauty announces to Beast that she is pregnant, which is alarming given the gift that Totenkinder has given them (see image on the right). 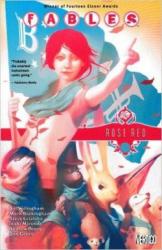 Mister Dark continues to consolidate his power, and wreak havoc in New York City, but the Fables are engaged in a web of struggles for dominance. Much of the volume is taken up with Rose Red’s back story, a delightfully, darkly twisted version of a number of Grimm tales (Snow White’s time with the seven dwarfs is spent in a ‘comfort cottage’, and if that phrase reminds you of Japanese army’s treatment of Korean women in the Second World War, you’re barking up the right tree). Things come to a head with a great, shapeshifting duel between Mister Dark and Totenkinder. 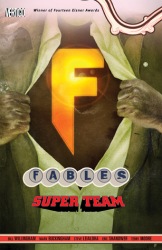 Volume 16, Super Team, makes the necessarily but potentially dreary preparation for further armed conflict not only tolerable but even enjoyable, as the comics-educated Pinocchio persuades the Fables that they need to dress as superheroes to prevail against the mounting forces of darkness. The battle when it comes is much more personal that the build-up suggests, but this is the book where Mister Dark is disposed of, thanks to fairytale cleverness rather than big explosive violence (though there is some of that amidst the shape-shifting). 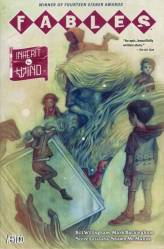 Volume 17, Inherit the Wind has many plot balls up in the air, or should I say plates spinning – the dexterity of the telling is brilliant to behold. Mrs Pratt has had a change of name, lost a lot of weight and turned to the Dark (capital intended) side. Ozma utters an oracle about the seven ‘cubs’ of Bigby and Snow, providing a slightly clunky spine for their unfolding narrative (one is to die, one become a king, etc). Rose Red has a Scrooge-like dream on Christmas Eve. 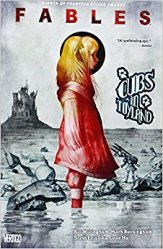 The main story of Volume 18, Cubs in Toyland, is a digression in which the Fisher King legend is mashed up with the notion of a place where lost toys go.

About here the game of Spot the Author comes on the scene – that is, Bill Willingham come close to disclosing that his alter ego in the Fable universe is the plump and earnest Ambrose, son of Snow White and Bigby. Ambrose narrates much of this book, and, we discover, is to end up partnered with one of the most formidable (and gorgeous) of the fairies. 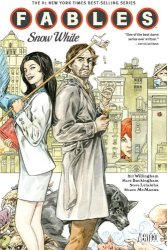 Almost half of Volume 19, Snow White, is taken up with the revolutionary adventures of Bufkin and his diminutive unrequited lover Lily.

The art, by Shawn McManus, is brilliantly comic.

In the main story, Snow White’s history comes back to haunt her, and tragedy ensues, not without a lot of big, noisy drama. In this story, not even the most loved characters are safe, and there’s a devastating death, not the first. 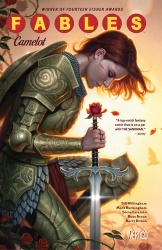 In Volume 20, Camelot, things comes to a head, ready for the climactic showdown in the last two books. Rose Red assembles a cohort of knights of a new, very large Round Table. Bigby Wolf meets Boy Blue in an afterlife, and is brought back into this world, but whether a force for good or evil who can say. The former Mrs Sprat is planning major bad stuff. Geppetto has found a way to build a new wooden army of his own – and the last time he had a wooden army he conquered many worlds. 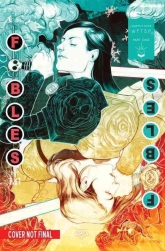 The title of Volume 21, Happily Ever After, is at least partly ironic. But each chapter of the main narrative is followed by a short ‘Last Tale of’ – so we see how at least ten characters end up, or at least what further good or evil they are up to when the series ends (Prince Charming is fighting the good fight on a world that is being taken over by Sinbad, Sleeping Beauty is turning into a zombie somewhere in space, Beauty is happily on the road with a new Beast, the Three Blind Mice logic their way to a happy ending …)

Meanwhile, on the main screen, the great final battle is shaping up to be be between Rose Red and Snow White. The rest of their back story is now told, and in a wonderful use of fairytale logic their sisterly rivalry is revealed as part of a family curse. Both discover they have vast magical powers, and both begin to wear armour. The character who has inherited the title of North Wind (I’m avoiding spoilers) is gathering great forces of nature. There are two male threats to be dealt with: Bigby Wolf, back from the dead, and Snow White’s apparently immortal first husband. There’s a very funny version of Sir Gawain’s decapitation of the Green Knight. By the end it looks as if everyone we cared about in the series is either dead, exited or about to kill the others. 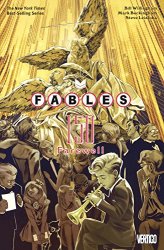 And then, ‘Farewell’: where other volumes are compilations of up to 11 individual magazine, this one is from a single bumper issue, Nº 150, featuring what the text calls ‘the battle which ended Fabletown for all time’. (If like me you were just a little bored by the big battles at the halfway mark, be of good cheer, this battle has much more character – Willingham isn’t an idiot.)

For evidence that Bill Willingham is a brilliant story teller, you wouldn’t have to go past the way the Bigby-Wolf-out-to-kill-his-children story is resolved, in three and a half spectacular spreads. The dispatching of Snow White’s first husband is masterly in a different way – we’ve understood how it will come about for a hundred pages, but the execution is just beautiful.

Once the final confrontation has played out, there are more ‘Last’ stories. Some are on the raunchy end of the spectrum, as in the solution to the Snow Queen’s love life. Some are blissfully domestic, as in (The Lady of the) Lake’s. There’s politics (Pinocchio becomes a President of the US who will never lie – imagine that!), religion (the Boy Blue cult leader moves on to mammalian jihad), and philosophy (Death’s single page story is not a story). And then there’s a four-page fold-out happy-ever-after picture of Bigby and Snow with 20 generations of descendants.

A word about guest artists and stand-alone stories: in the last two volumes these are the ‘Last’ stories, but every volume has some of them. My favourites are:

Volume 15: ‘A Thing with Those Mice’, in which three blind mice could almost be characters invented by Lewis Carroll, art by Brazilian João Ruas.

Volume 18: ‘The Destiny Game’, in which Ambrose tells the unexpected story of how the Big Bad Wolf came to marry Snow White, with breathtaking guest art by Gene Ha. This incidentally sets up one of the main themes of the remaining volumes, that if someone enters a version of an old story, there is a powerful force at work to make things go the way they did in the original.