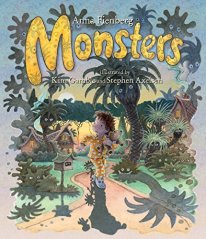 This is the final collaboration between Anna Fienberg and Kim Gamble, the creators of the wildly popular Tashi books. They began it when they both knew Kim didn’t have long to live. When Kim became too ill to continue he bequeathed the job of finishing the illustrations to his close friend Stephen Axelsen. In the  published book it’s all but impossible to tell where Kim’s work finishes and Stephen’s starts. So the book is a testament to love and friendship, a cairn of lyrical words and luminous images.

It’s also a funny, scary picture book about a little girl, Tildy, who is terrified of monsters in the night and finds a way to overcome her fear through her friendship with Hendrik. There’s plenty of room to play spot-the-monster (and an occasional thieving magpie), and plenty of the visual and verbal wit and warmth that has made Anna and Kim (and, until now separately, Stephen) such beloved giants of Australian children’s literature.

Monsters is the eighth book I’ve read for the 2018 Australian Women Writers Challenge.