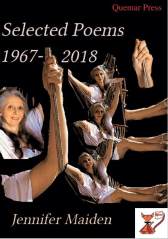 That’s one of Jennifer Maiden’s many self-descriptions in this book. It leaves out a lot, of course – the wit, the polemic eccentricity, the sensuousness, the drama, the scarily eclectic erudition and much more – but it does capture her commitment to the work of poetry and her occasional bursts of rage at, well, anything from genocidal war to ‘ethical security’ in her fellow left-wingers or sister feminists.

This is Maiden’s third Selected Poems. The 1990 Penguin Selected drew on just four books. Bloodaxe’s Intimate Geography was a kind of introduction to British readers covering 1990 to 2010. This selection covers Maiden’s whole poetic career, and is appropriately hefty.

I’ve read the book a little at a time over several months. As the poems are printed in approximate order of publication, you get to see Maiden’s subjects and poetic forms develop over the years, a little like a stop-motion movie. Her daughter, Katharine, for example, first appears in ‘The Winter Baby’ on page 61:

She feeds as firmly
as the heart mills blood,
her needs as fair as Milton’s God
and her eyes like night on water.

The ‘whimsical huge pleasure’ of Maiden’s maternal love gives rise from the beginning to complex, wide-ranging poetry. Incidentally, one of the pleasures of this book is that when a poem refers to one that Maiden wrote decades earlier, it’s often possible to flip back to the earlier poem: ‘Night on Water’, more than a hundred pages and nearly a decade later, refers to the ‘The Winter Baby’. The appearance of the Winter Baby ushers in Maiden’s characteristic use of dialogue. In ‘Chakola’ (page 71) Maiden and her now three-year-old daughter visit an old school in the Monaro (emphasis from the original publication, not reproduced in this book):

She says ‘You used to teach here.’ I say ‘No:
your great grandfather did, and your father
played here.’ But you say ‘You mean
grandfather.’ And yes, that’s where the sense
of self slips up of course – in history.
Maybe we’re all an ‘I’ as we confront
the past, the broken ford, the Numeralla
gleaming with sunlit absence.

(I initially read the third line as the little girl correcting the speaker, but on typing it out realised that it’s actually the person the poem is addressed to who corrects her, a more interesting progression, of a kind that isn’t unusual in Maiden’s work.)

Maiden’s engagement with politics and especially violence is there from the start: among the very early poems are ‘Princip in the City’, about the assassination of Archduke Ferdinand in 1914, and ‘The Problem of Evil’ a long narrative set in an unnamed war that reads as the US-Vietnam war. Her acute observaations of political figures as seen on TV, from George W Bush’s mouth (‘George Jeffreys 4: George Jeffreys Woke Up in Berlin’) to Julia Gillard’s eyes (‘Poor Petal’), begin on page 73 (about 1990) with ‘Mandela in New York’:

_____the first loss is not time or health,
so much as forever the freedom
to escape to the purposeless self,
He walks slowly, precisely, and smiles.

And it’s fun to see Maiden’s signature ‘So-and-so woke up’ poems coming into being. In a long prose passage (on pages 153 to 159) ‘George Jeffreys: Introduction’, first published in Friendly Fire, 2005):

The part of my brain that provides new things was often inaccessible about September 11. Then driving along the Monaro and watching the tumbling circus of clouds one day, I thought: what are George and Clare thinking? George and Clare are characters from my second novel, Play with Knives, and my later notoriously unpublished novel Complicity, or The Blood Judge. George Jeffreys is a Probation Officer turned Human Rights investigator … Clare is his former Probation client and sometime lover … who as a nine-year-old child murdered her three younger siblings. The two could clearly do New York and in the process, with the freedom of fiction, the horror-inhibited portions of my mind might speak.

And so George Jeffreys and Clare Collins wake up from wherever fictional characters go when their novel s are finished, and usher in the George and Clare poems, thirty of them so far, come into being, as George and Clare visit horrors, from Manus Island to the pirate coast of Somalia, talking non-stop to each other and personages as disparate as Donald Trump  and Confucius.

There’s much more. The book is full of joys, even as it confronts many of the terrible elements of our world.

I don’t usually comment on book design and production, but it’s probably important to do so here. My impression is that Quemar Press operates on a shoestring. But I wish they had employed a professional book designer, and a professional proofreader. The margins of this books are painfully narrow – top, bottom, left and right. And there are no blank pages. It feels as if as the poems have crammed into the available space, an impression that is reinforced when occasionally the final line of a poem drifts to the top of the next page, where it sits a lonely widow above the title of the following poem. This isn’t just an aesthetic matter: I found it physically hard to read more than a couple of pages at a time. If you’re new to Jennifer Maiden’s poetry, you might find one of the smaller volumes more reader friendly.

But the mild pain was worth it for the intense pleasure to be found on almost every page.