One of my joys in our new house has been to sit at my desk looking out onto the street and observe the reactions of passers-by to Matilda – Matilda being the Art Student’s first ever sculpture, created from copper piping, wire mesh, plaster and ceramic tiles when she was still The Consultant. It was years of work, a joy in the making and a delight to live with. Now, several times a day, I eavesdropped on conversations like, ‘It’s not a real dog, Daddy,’ or  ‘Now we’ll just say hello to Spot and then say hello again on our way back,’ or ‘No, you can’t climb in there with the doggy.’ She has become a small neighbourhood landmark.

So it was a shock this morning when the Art Student headed off to school  this morning and saw that Matilda was gone. A passerby told her she’s seen ‘the dog’ on top of the bus shelter in Enmore Park. Sure enough, there she was:

It was obviously meant to be funny. It may also have been meant as a kind of compliment: instead of lurking in the bushes in a tiny front yard, Matilda was set free to sniff the wind above the street. It took some ingenuity to get her up there – at least two men and probably a ladder. This was planned. Our neighbour who sleeps in his front room said he hadn’t heard a thing in the night. It was stealthy.

It was also callous. Matilda lost an ear and two of her legs were broken. The Art Student was distraught.

I called the Council, the police and the fire brigade. The Council gave me a number and said they’d get back to me. The police said I could ring 131444 and lodge a complaint of malicious damage (it’s not theft because they didn’t keep it), and if they decided to tie up a police officer’;s time with the incident, fingerprints might be taken. The fire brigade said they’d come out in a couple of hours. Then Peter, the guy who’s been transforming our back yard for us, arrived and said he could do it. I held the ladder while he risked life and limb to manhandle the statue back to firm ground.

She’s now safely back home. I have no idea how much of th damage can be repaired, or whether the Art Student will ever again be quite so free about putting her work in the public eye.

Added in the evening: It’s now clear that the sculpture can’t be repaired. The armature is broken in at least five places. An ear is sheared off. Even if the armature was repairable, we no longer have the tiles that made up the mosaic. 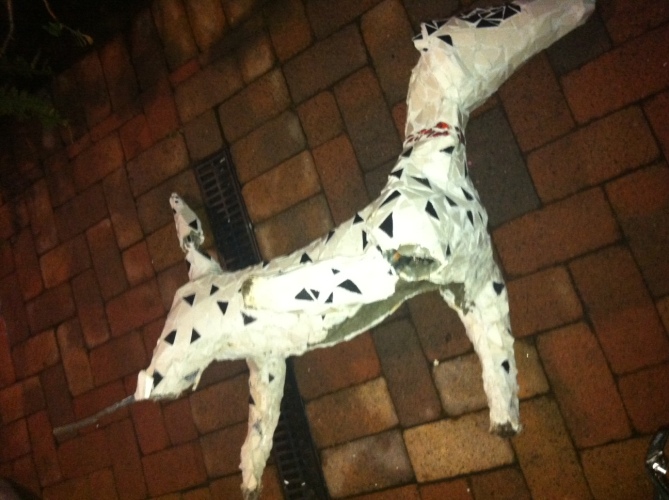 Where the dog once stood there’s now a notice:

We’re not holding our breath.

The Book Group, the Finkler Question and the SWF by night

This won the Booker Prize last year. Howard Jacobson lectured on Dickens to at least one member of my book group at Sydney University in the 1960s. He’s a guest at this year’s Sydney Writers’ Festival and we’d decided to combine our group meeting with a visit to the festival. Even if three members of the Book Group weren’t gentiles married to Jews, this book, which is broadly speaking about gentile–Jew relationships, would have been a logical choice.

Before the group meeting:
When I’d read to about page 80 I wrote a draft blog entry explaining why I didn’t finish the book. Mainly, I found the central narrative thread, in which a gentile man obsesses over the implications of having been mugged and called a Jew, to be both flimsy and ponderous. That wouldn’t have mattered if it was funny – and after all, much has been made of the Booker going to a comic novel – but I didn’t laugh once. Too often a character is given just enough two-dimensionality to allow the writer to take a satiric pot shot at her/him. There are jokes. Our gentile hero (he’s a serial romantic, Treslove by name, get it?) is in love with a woman who confesses that she’s ‘a bit of an arsonist’, and in the morning he wakes to ‘twin realisations’:

The first was that she had left him. The second was that his sheets were on fire.

Boom-tish! or Clunk! You be the judge.

In that draft I said, with only slight exaggeration, that a two page account of a Google search was the most interesting thing in the book up to that point. I did read on, hoping only for a cute line to quote as the point where the book and I parted company.

It was not to be. The Google search – “Anti-Semitic Incidents” – foreshadows a transition to something much more interesting. The unfunny humour keeps coming, and all but one or two of the characters stay paper thin, but from about the halfway point the book begins ringing the changes in a tantalisingly complex way on themes of Jewish identity and culture, Judaism, anti-Semitism, internalised anti-Semitism, Zionism and anti-Zionism. Viewpoints multiply, transmogrify, collide, dissolve. Just as you think the book is coming to a settled view, a telling incident or a forceful argument challenges that view. It’s not just the familiar ‘two-Jews-three-opinions’ thing, though it includes that. It becomes a dramatisation of intractable complexity.

Raissa Maritain, Russian Jew turned French Catholic philosopher, wrote what could have served as an epigraph to the second half of The Finkler Question: ‘To every argument can be opposed an argument, and thus appears the futility of all argument.’ Or perhaps it wouldn’t serve, as she was talking about faith as superior to reason. Up to a point, the arguments are tested here, not against faith but against the characters’ experiences – of love, loss, betrayal, disappointment, kindness, stupidity, brutality – but the characters are so thin it’s hard to believe the testing is real.

Yet other people, including the Booker judges, have loved the book. I came away feeling that I’d somehow missed the point, much as Treslove does throughout the book.

After the group meeting:
We met at a pizzeria in the wharf precinct. Three of the seven of us came straight from Howard Jacobson at the Sydney Recital Hall. Those three and I had read the book, a third had reached page 225 and was enjoying it. All the others had a much better time with than I did. One said that like me he’d noticed page 79 as the point where things became interesting, but unlike me he’d found what came after that funny in the I’ve-got-to-read-this-to-my-wife way. Others related strongly to Treslove. When I said there was almost nothing to the character they agreed, but saw that as a brilliant depiction of a certain kind of personality: ‘There’s a little Treslove in all of us.’ Someone related strongly to the theme of men of a certain age (he said ‘our age’) looking out for each other when their wives have died. Sex scenes that I found weirdly unfunny and not much else were to other people touchingly intimate. The scenes towards the end that I read as competently introducing some much needed pathos (please note the emotional distance in that way of saying it) made St least one grown man cry.

I found myself conceding that I’d enjoyed more of the book than I’d been willing to admit. But mainly it was interesting to see that the book spoke so personally to the others who had read it. Evidently I was right – I’d somehow missed the point. And the thing is, if I were to reread the book, I expect I’d miss it again. I’m the wrong horse for that course.

Our plan had been to go to the Chaser’s Empty Vessel  show at  nine o’clock, but by the time we got to the venue it was half past, and the person in orange T-shirt told us it was sold out. Some of the others went on to the poetry reading at the Number One Wine Bar. I came home.