Hilary Mantel brings up the bodies

I’m probably the only person of my generation whose grasp of what it was like to live in the courts of the Tudors comes mainly from an article written for The School Magazine by award winning children’s novelist and occasional commenter on this blog, Cassandra Golds. ‘The Princess in the Tower’ focused on Elizabeth, imprisoned during the reign of her half sister Mary, but there’s a memorable paragraph . It likens the court to a jungle where elegant people circled each other like wild beasts, seeking the advantage. Sadly, I’m writing this far from home, so can’t give you a quote. (Cassandra, if you read this, maybe you could add one in the comments section?) [Added later: Cassandra has commented with the passage which is even more apposite than I had remembered. Thanks, Cassandra.]

Even more than Wolf Hall, to which it’s a sequel, Bring up the Bodies validates that image in its portrayal of the court of Henry VIII. But at its heart there’s Thomas Cromwell, no wild beast but a methodical tactician, serving the king and good of the kingdom, receiving insults with apparent stolidity but forgetting nothing, keeping his own counsel, taming some beasts and destroying others.

I was reading this in a cafe in Goreme in Cappadocia, when an Australian woman (the cafe offered a decent flat white, much sought after by Australian coffee drinkers) called from several tables away.

Australian flat-white-drinking woman: ‘How are you finding that? I loved Wolf Hall but I found that one a bit hard to get into.’
Me: I’m loving it. I think it’s miraculous the way she gets right inside the minds of people from that time.
Australian flat-white-drinking woman’s grey-haired male companion: it’s all in the mind.
Me: Um, yes.
AFWDWGHMC: It’s past lives.
Me: Oh, you think Hilary Mantel was there in a past life.
AFWDWGHMC: Not just her, everybody.
Me: Well, that’s a conversation stopper if ever I heard one. (I didn’t say that, I just wish I had.)
AFWDWGH: She’s written another book, you know, a nonfiction book called Anne Boleyn, Witch.

So there you are. If anything was going to make me believe in past lives, it might well be this book. And if Hilary Mantel has written that nonfiction book, I wish she had spent the time on the next novel about Cromwell. It’s not that I want to see him get his comeuppance, as of course he will. I just want more of him. And I worry about his sweet, naive son Gregory.

PS: I read this in Turkey, among relics of rulers at least as much at the mercy of their whims as Henry Tudor. I wonder how English history might have gone if Henry could have had a harem. Surely if he had four wives at a time the need to have a son might have been less desperate. Mostly I didn’t take the book on outings, preferring to take thinner volumes. But here I am, reading it in the queue to see the treasures in Topkapi Palace. 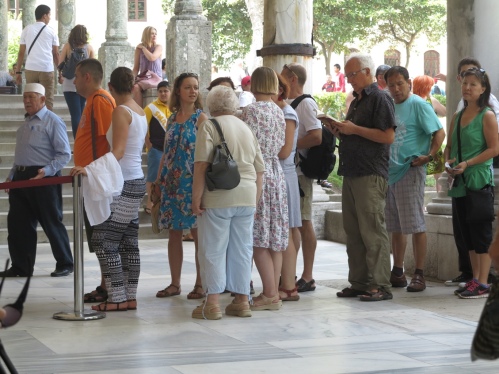 This entry was posted in Books and tagged Cassandra Golds, Hilary Mantel, Novel, The School Magazine. Bookmark the permalink.

10 responses to “Hilary Mantel brings up the bodies”