The slender rationale for including these books in a shared blog post is that they’re both comics, and I read them both in a single beach-side holiday afternoon. 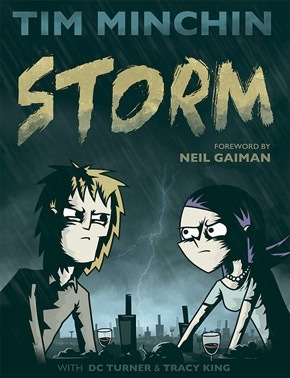 Storm had its first incarnation as a beat poem Tim Minchin performed in one of his musico-comic solo shows. DC Turner and Tracy King, animators, loved it and saw its potential for an animated film. When they happened to meet the man himself a little later they asked his permission, and voilà, after just a couple of years’ work by many people, their video was scoring millions of hits on YouTube. This is the comic book of the film of the poem.

The poem tells of a dinner conversation where one of the guests (‘Tim’, known mainly as ‘I’) throws civility to the wind and delivers a blistering rant in defense of evidence based medicine and the scientific method against another guest, the eponymous Storm, who persistently advocates hip irrationality. It’s funny, both in its remorseless point scoring and in its mockery of the protagonist’s probably futile passion. It’s also completely serious, and includes a sweetly lyrical evocation of the wonders of the actual world.

The book in effect performs the poem on the page, illustrations and typography doing the work of voice and music. When ‘Tim’, in full snarky flight, asks, ‘Do we actually think that Horton heard a Who?’, a pale blue Dr-Seuss elephant trunk pokes in from a corner of the frame. And there’s an extra comic dimension in images of the other diners’ reactions – I particularly like his wife’s scowl when he mentions the tattoos on Storm’s breasts.

And then there are the equivalent of DVD extras: a foreword by Neil Gaiman (such a nice touch to have one of the living masters of fantasy write approvingly of a book that could easily be misread as antagonistic to fantasy); accounts of the book’s genesis by the writer and the artists (they are called illustrators, but they are much more than that); and a selection of alternative covers by other comics artists.

This volume of Saga continues to be as funny, suspenseful and artfully told as the first three volumes. I just reread my blog post on those, and don’t have anything to add. Except possibly that it begins with a full page close up of the television-head of one of the aliens emerging from the birth canal, Hazel’s parents separate, Hazel herself is kidnapped by a television-headed insurgent, who has also kidnapped the one we saw being born. Sadly the next volume won’t be here for an awfully long time.