Madeleine Thien, Do Not Say We Have Nothing (Granta 2016)

Before the meeting: This book tells a story of three generations of a Chinese family in the 20th century. It includes a graphic evocation of the horrors of the Cultural Revolution and the purge of ‘Rightists’ that preceded it, and an equally graphic account of the events surrounding Tiananmen Square in 1989, as gleaned by a young woman of the Chinese diaspora who was born and brought up in Canada.

I found the first 50 pages hard going, as the different time periods were introduced, with no clear indication of how they were related. But once the several stories were up and running, I was engrossed.

Of the vast amount that has been written about this period in China, I’ve read Han Suyin’s Wind in the Tower, in which the Cultural Revolution is seen as a brilliant strategy to save the revolution from living death, and William Hinton’s Fanshen (1966) and Shenfan (1984), brilliant accounts of the Great Leap Forward and the Cultural revolution as they played out in a single village (I saw David Hare’s play of the former at the Pram Factory in Melbourne and then at Belvoir in Sydney). I haven’t read any of the famous memoirs such as Li Cunxin’s Mao’s Last Dancer and Jung Chang’s Wild Swans, so I can’t say how this novel compares to them, but I can say that it makes Han Suyin look like a PR spin merchant, and gets horrifyingly deep under the skin of the kind of events William Hinton describes.

It doesn’t come across as anti Communist propaganda; it’s more a terrible tale of a dream betrayed. Even as people’s lives are being destroyed they stay firm in their belief in the revolution. Partly this is a survival mechanism – if you can say the correct slogans with sincerity your chances are greatly improved. Partly, though, it’s also a result of the power of the Maoist dream. The shattering of that dream as the People’s Army turns on the people in 1989 is among the most heartbreaking writing I’ve ever read.

Like any powerful novel, this one doesn’t let the reader imagine that the events it portrays are safely of another time and place. Call-out culture on the internet these days may not be as savage as the criticism sessions in the Cultural Revolution, but it shares some of its structure of feeling. The power of slogans to block complexity is having devastating effects on lives in Australia – or more precisely offshore from Australia – as I write this. The term ‘climate change’ is being expunged from Donald Trump’s US agencies as surely as ‘counter-revolutionary’ knowledge was erased under Mao. [Added next day: not to mention ‘fire and fury and – frankly – power’.]

I cried a lot.

After the meeting: The conversation stayed with the book for most of the evening, and even when it departed it was still tangentially related.

Not everyone loved the book as much as I did, but I came away from the evening with an enriched appreciation for its complexity. I think it’s true to say that everyone had at least one scene or character that had struck them. A couple of us said we found the descriptions of music didn’t work; someone said that these descriptions were clearly important to the characters, but not really to the reader. One chap said he had got out his recording of Glen Gould playing the Goldberg Variations – the same recording as features in the narrative – and put it on it while he read, and that this had worked brilliantly.

So not only is this a terrific novel to read, but judging by our experience it’s also a terrific book club title.

It’s a long weekend in New South Wales, the Rugby League Grand Final, and a busy, artsy time for our household.

After the Orange Grove Market on Saturday morning, we went to the Australian Centre for Photography in Paddington where there’s an excellent exhibition of students’ work as well as The Lake, in which ‘ten artists explore the exquisite strangeness of the Australian landscape through photography, video and interactive work’, and where I got unreasonable pleasure from making waves swell and crash in one of the interactive video pieces, as well as very reasonable pleasure from the many spectacularly beautiful photos, both digitally manipulated and not obviously so.

Then on to the Roslyn Oxley Gallery where we were puzzled by half a dozen large, rough drawings on butcher’s paper by Tatzu Nishi of equestrian statues that appeared to have been  wholly or partly transported into domestic settings. If these huge drawings, with much Japanese notation on them, weren’t enigmatic enough, there was the added mystery that much of the wall space in that room were bare. Deciding that both the sketches and the blank walls would remain among art’s little mysteries, we stopped on our way back to the car to look at a slide show of the artist’s installations, in which he builds domestic spaces around public objects – the spire of a European church, a street light, a large graffitied sphere in a park somewhere … The mystery of the half bare room was part way to being cleared up.

The mystery was cleared up completely the next afternoon when we visited the Art Gallery of New South Wales to see something that had been mentioned in the small print of a Roslyn Oxley hand-out, the John Kaldor exhibition (a revelation in its own right, but I’ll skip over that). As a Tatzu Nishi project, the equestrian statues that flank the main entrance of the gallery are enclosed in bright blue cladding, with ramps leading to doors that give us access into the blue rectabgular shapes. And inside, we see what those blank walls in Paddington are waiting for. No doubt the photos that appear there over the next couple of days will be better – and much bigger – than these, but here’s a look. Go and see the installation yourself if you can – no photo can convey the exhilaration of walking into those rooms, especially the bedroom. (The John Kaldor site has a slide show of the construction.)

The Spoils of War as seen from the ground: 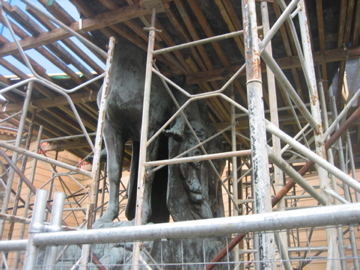 and from inside the blue cladding (the fruit on the table is real):

The Offerings of Peace in the elevated bedroom: 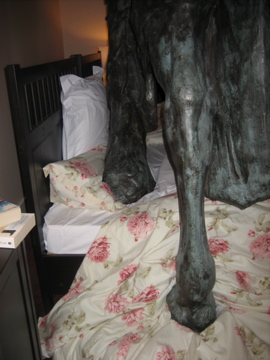 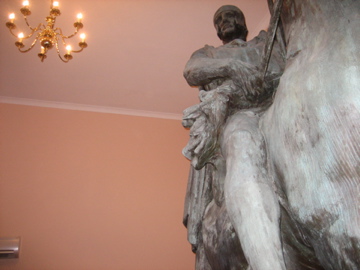 But back to Saturday. After dinner we were off to the Opera House to hear Christopher Hitchens at the Festival of Dangerous Ideas. (Just so you know, I think such a festival is a pretty lame idea. What’s the point of giving a huge platform to people who want to argue against legislation protecting workers from exploitation?  Is any useful purpose served by Germaine Greer once again expressing her contempt for Steve Irwin? Indeed, once you’ve read the title of Christopher Hitchens’s address, do you need to pay good money to hear it?) 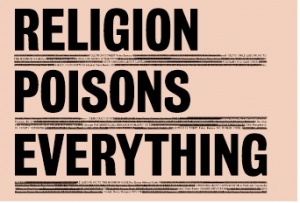 But we’d seen Christopher on Q&A on Thursday night, and he was impressive: abrasive and pugnacious but brilliant and, actually, civil. So we decided to make him our Saturday night’s entertainment. We managed to get late-bookers’ seats in the choir behind the stage. Here’s a phone shot taken 10 minutes before the show started from our pozzie in the middle of the front back row. In those ten minutes, the whole hall, including most of the choir, filled. It seems that many people in Sydney are hungry for atheism, or maybe just like a good smackdown, whoever is being smacked.

After the preliminaries – a fabulous Welcome to Country, a speech from the Opera House’s CEO (who hinted that he was heading off to the Sleaze Ball after the talk), an excellent two-minute speech on the right to die from Sarah Taylor (who had won a soapbox-rant competition in the forecourt that afternoon), an introduction by ABC journalist Tony Jones (who called Hitchens, insultingly I thought,  a contrarian) – he gave a forty minute talk, then conversed with Tony Jones for another half hour or so. The audience applauded frequently, which was only right and proper, but at times created an uneasy sense that he was preaching to the choir. Sadly, I mean that only metaphorically – the acoustics in the actual physical choir were terrible, so we missed an awful lot of what was said in the Hitchens’ upper-class mumble. When he started quoting from the Monty Python Philosophy Song what should have been a delight was just an irritation.

I won’t try to summarise his talk – it will be all over the internet soon, on ABC Fora or Slow TV or who knows where else. I loved it that he started out with a personal connection to Australia: he read a lot of Neville Shute as a teenager, and gave us the evangelicals’ banner ‘There is still time, Brother’ flapping in the breeze after the end of the human race in On the Beach as an epigraph for his talk. I loved his response to Cardinal George Pell’s then-yet-to-be-given address, ‘Without God we are nothing‘: ‘Don’t you take that tone with me.’ I wonder how the scattering of women in hijabs and other people of faith in the audience responded: presumably they abstained from applauding at least the cheaper shots (calling Moses a schizophrenic comes to mind). I had a sense, though, that for all his seriousness and erudition, Hitchens somehow was missing the point of religion. When Tony Jones asked him if he would consider the pervasive religious practice of Bali as poisonous, I think he said (remember, my hearing was impaired) that that wasn’t really religion because it wasn’t poisonous. And he replied similarly to a question about a Salvation Army Officer who has devoted his life to demonstrably effective good works. I’m in the atheist camp myself, but came away unconvinced that religion is the enemy of all that is good. I did, however, come away thinking, and that can’t be bad.

After our visit to the AGNSW yesterday afternoon we went to David Hare’s Gethsemane at Belvoir Street. The play started out with what might have been a quote from Christopher Hitchens, a statement that some people put their faith in a book, some in one book some in another, but the book gives them certainly, and a further statement that the play we were about to see was full of people with a book. The second act started with a similar Hitchy address to the audience about how religious people are incomprehensible. Those two moments, however, had no discernible connection to the rest of the play. There were two very watchable performances, from Hugh Keays-Byrne as a political fixer and Emily Barclay as a troubled teenager. Sadly, whether it was the performances, the direction or the writing, I found the play as a whole pretty much an incoherent mess. And what’s more the Gethsemane reference was irritatingly illiterate: the whole point of the Agony in the Garden, according to these characters, was that Jesus doubted his mission. I would have thought he was doing something a little less cerebral, like experiencing wretched miserable terror and unhappiness about it, without a shadow of doubt. ‘Father if it be thy will, let this chalice pass from me’ is surely a far cry from ‘I don’t want to be a teacher any more because there’s too much paperwork and not enough actual teaching.’ According to Time Out (as quoted on the Belvoir web page), the play provides ‘an insight into why we are in such a mess today’. Not to me, it doesn’t.