After a year as an Art Student, the woman who wishes her older son would make cheerful movies has created these, among other things: 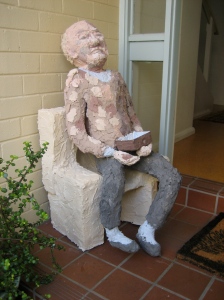 It's a little startling to come upon this plaster chap at the front door ...

... called 'Locked In', and modelled on a resident in Mollie's dementia ward ...

... and a little disturbing to have this Penny-as-Frida on the bedroom wall.

A word of explanation: on the Book Show last week, John Tranter described the process of writing Starlight, his most recent book. He fed Baudelaire’s Les fleurs du mal into a computer’s translating program, and took the resulting gibberish as the first draft of a hundred sonnets. Rather than invite comparison by doing anything with Baudelaire, I took an English sonnet, and got Google to translate it from English to Russian to Catalan to Malay to Basque, etc, through about 15 languages, then back at last into English. Astonishingly, some whole phrases endured, but it would be fair enough to say I arrived at gibberish. Then I tortured that into scannable rhyme (though not reason).

Sonnet 11: Sorry, Bill!
My mistress eyes, like all, the sun,
likes the red coral on his lips.
The snow is white. Why same breast (one)?
You have the power, you have black pips.
I’ve seen pink damask, red and white,
but not the roses in her cheeks,
some perfumes, yes, and oh all right,
instead of true love, what she seeks.
I liked to hear his voice, but know
The Sound of Music was more fun.
I will not see a goddess, no!
Lady, in fields the string has run.
At that time, Lord, I was strange love.
Compare! Reject! It’s false. Now shove!