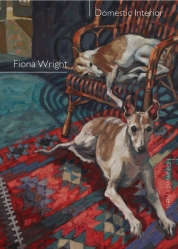 One of my New Year resolves for the blog is not to attempt to review every book of poetry I read. I’ll still blog about them, but for each book I’ll focus on one or possibly two poems that resonate with me in some way.

Domestic Interior tests that resolve, because an awful lot of its poems speak to me loud and clear.

I haven’t read Fiona Wright’s first book of poetry, Knuckled (2011), or her collection of essays, Small Acts of Disappearance  (2015), both published by Giramondo, but somehow I’d picked up an expectation that her work would bristle with introspective misery. That expectation, even though endorsed by the back cover’s reference to ‘highly charged moments of emotional extremity’, turned out to be wide of the mark. Even the section titled ‘A Crack on the Skin: On Illness’, there’s much lightness, grace, good humour and a pervasive celebration of friendship. And always, especially for Sydney readers, there’s plenty of recognisable life as we know it or, in a number of poems, as we overhear it.

I caught a glimpse of Fiona Wright at a funeral when I was still part way through my first reading of the book, reason enough to choose to blog about ‘Camperdown, St Stephen’s’:

For the benefit of non-Sydneysiders: St Stephen’s Anglican Church is the site of the historic Camperdown Cemetery. The Moreton Bay fig that grows there featured in Nadia Wheatley and Donna Rawlins’s classic and totally not-morbid picture book, My Place. It’s a beautiful and almost intimate setting, where it’s not terribly weird or morbid to eat a sandwich leaning against a headstone, so it may take a while for the force of that image to sink for a local reader. Rookwood is a suburb in Sydney’s west whose name is enough to evoke thoughts of mortality in most of Sydney and well beyond: it is home to what Wikipedia calls the ‘largest necropolis in the southern hemisphere’, now facing problems of overcrowding.

From the opening image, in which a stark memento mori lurks beneath a pleasantly mundane lunchtime scene, the poem plays first with the idea of hunger, associated with the sandwiches: the moss is like rice, the speaker is greedy for sun, and the sun for the earth. (It must be autumn, warm enough to have lunch outdoors, but cool enough that patches of sunlight are tepid.) Then, in a neat couple of almost rhyming short lines (‘I don’t want / a monument’), the headstone comes to the fore.

Which leads to Rookwood – yes, it stands in for death on a grand scale, but the lines are rooted in this specific time and place: there really are debates about how to deal with the vast numbers of bodies needing to be buried. Camperdown Cemetery is comfortably historical; Rookwood is today’s news. The dead are named for the first time, slyly rhyming with ‘read’ (maybe she’s reading news on her phone while eating her sandwiches).

Then she thinks of her friend’s photos (received on the same phone?). Roses lie against headstones, just as the poet does in the first stanza. Only now it’s many poets and they are the dead.  No sun no pleasant sandwiches there: the roses laid in homage don’t carry much force – images of litter and bedbugs come to mind, and from this distance perhaps the roses are reduced to something like little bursts of blood on hostel sheets.

‘My bones are cold’: she now identifies with the dead poets. And in the last three lines, the chill of that identification goes deeper: she is heading North, to that Europe littered with dead poets, and she fears that she is about to join them.

Maybe it’s just me, but I laughed. I don’t think the poem or I are trivialising death or the fear of dying. But the poet’s fear here is not the kind that strikes with a diagnosis of stage 4 pancreatic cancer. There’s something fancifully neurotic about it, an edge of mockery that doesn’t trivialise the fear but allows us to breathe around it, to approach it playfully: after all, how seriously can you take the the graves of poets when they are presented as littering Europe like bedbugs in a hostel?

My writing of this blog post was interrupted by an expedition to Manly. After visiting North Head Project at the Manly Art Gallery (open until 18 February and worth the ferry ride), we went up to North Head itself and wandered in one of the three cemeteries connected to the Quarantine Station there. Walking among the graves of mostly young people, I thought of this poem, and realised that for all its lightness of touch, its rootedness in 21st century Sydney and a particular friendship network, it sits squarely in a tradition: ‘and I’m afraid’ echoes the refrain, ‘Timor mortis conturbat me (The fear of death confounds me)’, common in mediaeval European poetry. I went hunting and realised I knew it from William Dunbar’s ‘Lament for the Makers‘. That 16th century poem, of which every stanza ends in the Latin refrain, includes a kind of honour roll of poets who have died, beginning with ‘noble Chaucer’ and continuing with names now long forgotten. Rereading ‘Camperdown, St Stephen’s’ in that context, I like it even more, but you don’t have to have read Dunbar or visited North Head for the poem to work for you.

Domestic Interiors is the second book I’ve read for the 2018 Australian Women Writers Challenge. I received a complimentary copy from Giramondo, for which I am grateful.