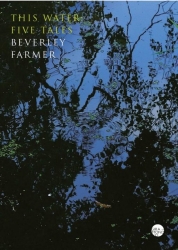 This Water is Beverley Farmer’s tenth book. Her first, the novel Alone, was published in 1980. Her short story collection Milk won the Christina Stead Prise for Fiction in 1984. She was shortlisted for the Miles Franklin Award in the 1990s, and in 2009 she received the Patrick White Award, given each year in November to an Australian writer ‘who has been highly creative over a long period but has not necessarily received adequate recognition’.

As Alexis Wright said in her acceptance speech for this year’s Stella Prize, ‘any book is nothing less than a monumental achievement’. To have written book after book as Beverley Farmer has done, with just enough recognition from those who bestow cultural credibility, is beyond monumental.

I haven’t read any of her earlier work, apart from an essay or perhaps two in the late lamented Heat, but I suspect that This Water represents something like a Late Style. There’s something about its five stories that signals a grand indifference to fashion or indeed to how any reader might judge them. They are:

None of the characters in any of the tales has a name.

I can’t say I loved the book, but it’s beautifully written, uncompromising in its commitment to exploring aspects of women’s experience, and strong enough that when ‘light year’ is referred to as a measure of time (‘Our dreams are like the stars. What we see is light years ago.’) my irritation was forgotten within a couple of pages. If you plan to read just one of the stories, I recommend ‘The Blood Red of Her Silks’.

This Water is the fourth book I’ve read for the 2018 Australian Women Writers Challenge. I gratefully acknowledge that my copy is a gift from Giramondo.