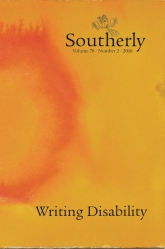 The term ‘disability’ covers a vast range of experience: body shapes that differ from the norm, impaired bodily function, chronic pain, chronic disease, learning difficulties, the autism spectrum, conditions labelled ‘mental illness’, combinations of those and more. Though that’s an important point, it’s also an obvious one, and perhaps only in an academic context would you invoke a French theorist to make it, as in this passage from Andy Jackson and David Brooks’ essay ‘Ramps and the Stair’ in this Southerly:

I would have been satisfied with this richly diverse reading experience, and then the short reviews section sprung a pleasant surprise on me in Michael Sharkey’s review of David Musgrave’s Anatomy of Voice. This book is an elegy to Bill Maidment (1924–2005), who lectured at Sydney University and was a mentor and friend to Musgrave and Sharkey. Though I wouldn’t presume to claim him as a friend, he was one of the three most inspiring, and dare I say loveable, teachers I had at university (the others were Elisabeth Hervic, of the French Department, and David Malouf). The review sent me to Gleebooks to buy a copy of the book, but the real delight was in Sharkey’s departures from the business of reviewing to note down some of his own memories of Bill:

Bill Maidment received that sort of admiration and affection from several generations of students and fellow teachers. He represents a world now gone, when an Air Force radio operator, journalist, plein-air geographer and adventurer, forensic critic, collector of Australian folklore and arcane Renaissance knowledge, and brilliant lecturer could exist in one person, and hold a packed lecture theatre in such thrall that the listeners erupted in applause not only at the end of lectures but sometimes following a bravura exegesis.