I posted about Arthur Boothroyd’s hundredth birthday last October. A lifelong friend of Arthur’s who lives in Switzerland just broke the news to me in a comment on that blog entry that Arthur has died. It happened on 10 February, and the funeral was last Tuesday, 15 February. I’m very sorry to have missed it. He was a gracious presence in Annandale, and created a good bit of the visual environment for generations of Australians.

In October I spent some hours in the State Library trying to get hold of some images of his work, and gave up in despair of ever mastering the necessary technology. This time, Google gave me this, from March 1950: 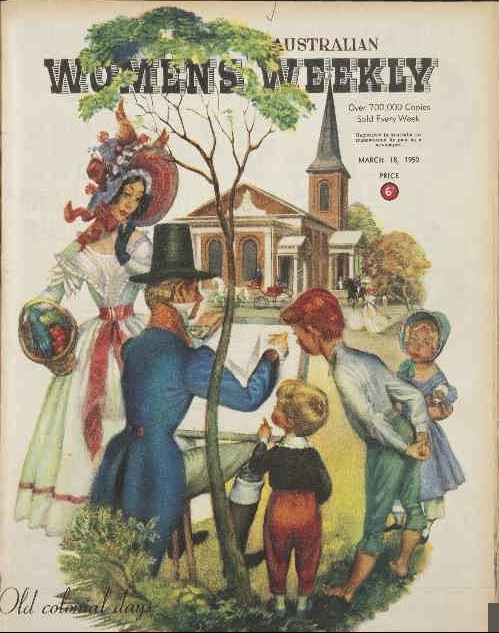 Today is Arthur Boothroyd’s hundredth birthday. Yesterday he came home from hospital, where he had been because of a chest infection. I posted about Arthur a couple of years ago. Here’s part of what I said then:

Yesterday afternoon Penny and I were walking the dog when we met Arthur coming the other way. Arthur lives three doors down from us. He’s in his early 90s and dealing with encroaching dementia and increasing frailty, but regularly walks to the park and back. When you encounter him on one of these walks he will make conversation from a small supply of stock phrases — about the weather, how lovely the park is, and not a lot else. Yesterday, his mode of progress along the footpath made me fear for his safety: he was tottering, as if the only thing that stopped him from falling forward with each step was act of putting out a foot for the next step. We stopped to say hello, and he put both hands on Penny’s shoulders, leaning in close to her. She asked if he needed help to get home, but he pooh-poohed the idea, even while prolonging the contact for the purpose, it seemed to me, of catching his breath and keeping his balance. After a little while, he asked, ‘Do I know you?’
…..
[Arthur] had been, in the 1950s and 60s, the main illustrator for The Australian Women’s Weekly: in those years, the AWW published short stories and historical features, and as often as not it was Arthur who provided the pictorial elements. He also illustrated a number of children’s books then and into the 90s. I googled him – “Arthur Boothroyd” minus everything that brings up a British audiologist of the same name — and discovered only a handful of references: the most common is to the booklet published to mark the opening of the Sydney Opera House, which he illustrated.

It’s not that Arthur is forgotten, or that he is without honour among the confraternity of illustrators. I mentioned him to a children’s illustrator the other day, just his first name, and she said, ‘Do you mean Arthur Boothroyd? I admired his work so much when I was starting out. He was what I wanted to be!’ He is known and loved by long-term Annandale dwellers. More than one person in our block cooks meals for him. But of all the people, both children and adults, whose visual imagining of Australian landscapes and histories were profoundly influenced by his Women’s Weekly work and his children’s books, how many have even heard of him? A select few artists become household names and get headlines when a work is sold for a million dollars. The great majority fade away, and their work too fades. I think the least we can do is let them lean on us in the street to keep their balance and regain their breath.