A young Tamil man who has been seeking asylum in Australia heard that he had been definitively been denied refugee protection. and on Wednesday night he doused himself with petrol in Balmain and set himself alight. He’s in hospital now, very badly burnt. Sarah Whyte had the story in today’s Sydney Morning Herald.

Minister Scott Morrison in partnership with the Sri Lankan High Commission have a focus ‘to ensure for the proper care and support of this young man’. And also the SMH cares, enough to carry it on page 9 of the hard copy edition.

This is already being spoken of as a ‘mental health’ issue. But it was also surely a political act. Martin Kovan had a challenging article about politically-motivated self-immolations in Overland a couple of years ago. Speaking in the Tibetan context, he wrote:

The immolations aren’t acts of terrorism, nor even of despairing disempowerment, even though it is clear that they emerge from decades of deep frustration. Their dramatic increase appears to demonstrate an absolute and unconditional commitment to freedom. All the existing written statements of the self-immolators make this clear. They are also a form of radical self-determination: no authority can take such sacrifices away from the community on whose behalf they were performed. They are what Oxford University sociologist Michael Biggs calls a legitimate part of the ‘global repertoire of contention’, a form of principled if morally painful action ‘intended to appeal to bystander publics or to exhort others to greater efforts on behalf of the cause’.

‘The immolations,’ he says later in the essay, ‘depend upon global real-time exposure for their influence to be felt; a purely domestic response remains all too vulnerable to internal silencing.’ The most obvious way to silence this young man, whose first name is Janarthanan, is to talk about it as a product of ‘mental illness’. No, it’s a statement about vicious cruelty in Sri Lanka and brutal indifference in Australia.

I posted about Arthur Boothroyd’s hundredth birthday last October. A lifelong friend of Arthur’s who lives in Switzerland just broke the news to me in a comment on that blog entry that Arthur has died. It happened on 10 February, and the funeral was last Tuesday, 15 February. I’m very sorry to have missed it. He was a gracious presence in Annandale, and created a good bit of the visual environment for generations of Australians.

In October I spent some hours in the State Library trying to get hold of some images of his work, and gave up in despair of ever mastering the necessary technology. This time, Google gave me this, from March 1950:

You heard about it here first

The Inner West Courier has noticed the little man:

Longtime resident David Lawrence tends to the roadside garden regularly and is mystified as to who placed the statue there.

‘It can be put down as a true Annandale mystery,’ Mr Lawrence said. ‘He seems to be collecting something, maybe it’s part of a bigger theme, who knows.

He said locals have largely welcomed the new addition, and would like to know who created the work of public art.

Well, as regular readers of this blog know, it’s an open secret. It’s nice to see it become a mystery.

Later addition: Two things have happened in the hours since I posted that.

The Art Student identified herself as the sculptor on the Inner West Courier site (over my objection that by doing so she was depriving the Inner West readers of the pleasure of a mystery).

We found a copy of the paper and discovered that the front page photo is much more impressive than the one reproduced on the web (both by Danny Aarons). Here’s part of the front page, for those unfortunate enough not to have the Inner West Courier delivered to their door.

Posted in Around Annandale, Vicarious vainglory

I’m currently reading Sri Lankan Catholic theologian Tissa Balasuriya’s Mary and Human Liberation and will no doubt blog about it in the next few days. But I’ve got to write a sonnet today, and a striking conjunction of my reading with what was happening around me seemed a good subject.

Sonnet 13: Bus stop incident
Tertullian, father of the church,
said,’Woman, you’re the devil’s gate,’
thereby leaving in the lurch
these young ones with whom I wait
near A’dale North Hotel. They toss
their shampooed manes of subtle gloss
and tug (here I avert my eyes)
on skirts that barely reach their thighs,
a generation’s uniform.
One’s loud, annoying, on her phone.
A gust of wind, a change of tone.
She cries like one caught in a storm
but cheerful as a lion cub:
‘Oh Jesus, I’ve just flashed the pub!’

Posted in Around Annandale, LoSoRhyMo

Another walk, another 17 syllables

Posted in Around Annandale, Books, Diary

I went for a two-hour walk …

At the  greengrocer’s today, one of the other checkout staff called to the young woman who was scanning my carrots, ‘Mercedes, what country do you come from?’ She called back, ‘Chile!’ My guess was that the exchange was drawing attention to her Latin American background, exotic in this context where most staff are Italian, Lebanese, or from a range of east or south-east Asian countries.

I looked over to where the question had been lobbed from, and recognised the customer. ‘The customer over there is a writer,’ I said. ‘Maybe he wants to give your name to a character in one of his stories.’

She looked interested at that possibility, but she didn’t ask the writer’s name.

Today is Arthur Boothroyd’s hundredth birthday. Yesterday he came home from hospital, where he had been because of a chest infection. I posted about Arthur a couple of years ago. Here’s part of what I said then:

Yesterday afternoon Penny and I were walking the dog when we met Arthur coming the other way. Arthur lives three doors down from us. He’s in his early 90s and dealing with encroaching dementia and increasing frailty, but regularly walks to the park and back. When you encounter him on one of these walks he will make conversation from a small supply of stock phrases — about the weather, how lovely the park is, and not a lot else. Yesterday, his mode of progress along the footpath made me fear for his safety: he was tottering, as if the only thing that stopped him from falling forward with each step was act of putting out a foot for the next step. We stopped to say hello, and he put both hands on Penny’s shoulders, leaning in close to her. She asked if he needed help to get home, but he pooh-poohed the idea, even while prolonging the contact for the purpose, it seemed to me, of catching his breath and keeping his balance. After a little while, he asked, ‘Do I know you?’
…..
[Arthur] had been, in the 1950s and 60s, the main illustrator for The Australian Women’s Weekly: in those years, the AWW published short stories and historical features, and as often as not it was Arthur who provided the pictorial elements. He also illustrated a number of children’s books then and into the 90s. I googled him – “Arthur Boothroyd” minus everything that brings up a British audiologist of the same name — and discovered only a handful of references: the most common is to the booklet published to mark the opening of the Sydney Opera House, which he illustrated.

It’s not that Arthur is forgotten, or that he is without honour among the confraternity of illustrators. I mentioned him to a children’s illustrator the other day, just his first name, and she said, ‘Do you mean Arthur Boothroyd? I admired his work so much when I was starting out. He was what I wanted to be!’ He is known and loved by long-term Annandale dwellers. More than one person in our block cooks meals for him. But of all the people, both children and adults, whose visual imagining of Australian landscapes and histories were profoundly influenced by his Women’s Weekly work and his children’s books, how many have even heard of him? A select few artists become household names and get headlines when a work is sold for a million dollars. The great majority fade away, and their work too fades. I think the least we can do is let them lean on us in the street to keep their balance and regain their breath.

More about the plaque

Someone got back to me from both councils yesterday.

There’s no mystery about the plaque down by Johnston’s Creek. ‘Oh, you mean the one honouring Jack Mundey,’ the man from Leichhardt Council said.

I gleaned a little more background by searching for ‘Jack Mundey’ on the Council’s web site. A local resident Joe Mannix proposed more than 12 months ago that a plaque be erected and its unveiling be a way to honour Mundey on his 80th birthday in October last year. The proposal was approved, but evidently there was a delay, as the actual unveiling happened earlier this month, eleven months behind schedule. In a Council handout dated Thursday 16 September, Mayor Jamie Parker wrote:

Last Saturday, Council officially unveiled a plaque to remember the 1972 Builders Labourers Federation Green Ban which joined with resident action groups to stop approved expressways carving up Glebe, Annandale and Lilyfield.
ooooThese actions demonstrated the combined power of union and resident actions in effectively defending local communities. The ill fated freeway project was as much about ‘slum clearance’ as it was about building a network for container movements from the port.
ooooA national treasure, Jack Mundey is 81 years old, and we were delighted to have him attend the function at Smith & Spindlers Park on Saturday.

There was a photo: 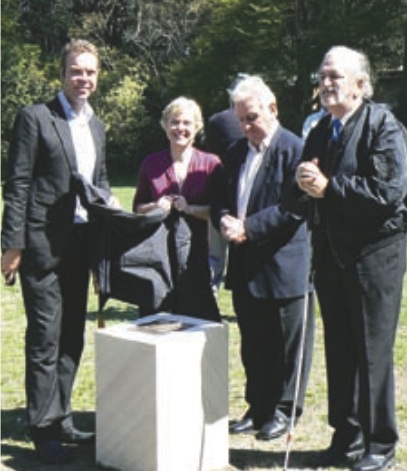 The man on the phone mentioned, as the Mayoral message didn’t, that there were plans to screen Fig Street Fiasco, a community video about the struggle made by Tom Zubrycki. I don’t know if the screening took place, but there’s a dramatic clip at the link that makes my friends’ dreams of violence seem less bizarrely unrealistic.

The caller from the City of Sydney said they hadn’t heard of the plaque in ‘what we call the Cardigan Street Park’ until they received my email. So that leaves us with the vandalism  scenario. The City of Sydney doesn’t have a register of plaques, though it is on a To Do List somewhere. He recommended that I write to the Lord Mayor asking that the plaque be restored, and said that would lead to action of some sort. I’ll do that, and hope to report back in a while.