A little over a month ago, I noticed a suspicious looking object on the pedestrian island just out the front of our house. It looked like a discarded shoe, but not quite. On closer inspection it revealed itself to be a Will Coles sculpture.

In case you can’t quite read it, the text on the sole of this cement shoe is ‘forgotten’, making it an elegant addition to the scattering of cement objects in our suburbs reminding us of our fragility, and the fragility of our environment.

But ‘forgotten’ wasn’t meant to last. To tell the truth I’d forgotten all about it until a car collected the barriers on the island on the weekend. Only then did I notice that all that remained of the sculpture was a stark shoeprint:

The shoe was gone before the barrier was knocked down.The barrier will be replaced in a week or so. The sculpture is now a prized – and prised – possession of a private art collector.

Posted in Around Marrickville

Will Coles’s works are probably seen and enjoyed by more people on a daily basis than those of any other sculptor. It’s not that crowds line up to see them, although he has been exhibited in galleries, but you might happen to look down while waiting for traffic lights or standing at a bus stop, and there will be a donut baring its teeth at you, or a squashed softdrink can inscribed with the word ‘Eternity’ in Arthur Stace script, or a mobile phone labelled ‘Hate’.

If you’re not familiar with his work, have a look at Mr Will on Flickr, and/or visit his web site. What I’ve been noticing is the way his work has been defaced – in Marrickville, Enmore, Newtown and as far afield as Surry Hills. In the video interview from Virtual Press Office below, he talks about this as part of the game, but sometimes it creates interesting new effects. The main damage to his work seems to come from would-be collectors and other street artists (or would-be artists). Could this be saying something more general about art in this society?

Street Plaque near the Brett Whiteley Studio in Surry Hills. An image of the intact work is here. 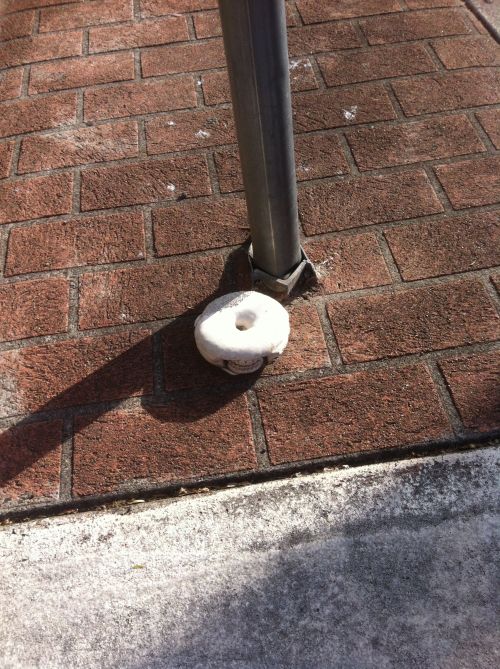 An undefaced Sweet Tooth in the back streets of Marrickville.

Man-Made at a bus stop in Enmore Road. A would-be collector was defeated by the glue and left us with a relic. There’s a photo of an unmutilated piece here.

Finite, outside the Newtown police station. From this angle it looks pretty much untouched, except of course for the tags on its top.

But here it is from the other side. Not just the graffitists, but another street artist with a distinctive lettering style have used the sculpture as their canvas. Not so bad really: it just changes the image from white-goods consumerism to tacky laundromat.

Someone tried to acquire this Work, also near the Newtown police station, but the glue defeated them.

Here’s a patch of wall just off Enmore Road that’s been liberally covered with posters and graffiti. Hidden beneath the layers is a Will Coles sculpture.

Voilà! The piece is entitled Laissez Faire, but its comment on larcenous capitalism is a bit lost when it has been chipped at and buried in red paint.

The spectacular mural on the corner of Phillip and Gladstone Streets, Enmore. The owner of the wall welcomes street artists, asking them only to avoid the entrance to his place of business. These artists have impressively given due deference to the Will Coles work that was there before them.

A detail from the mural showing Laissez Faire, and also the damaged smaller Coles work, Tag, to its left.

Posted in Around Marrickville

It’s all go chez Me Fail just now. Here’s a brief despatch from the fronts.

Shooting the movie soon to be known as the movie previously known as Scar finished yesterday. I managed to visit the location on Wednesday for a couple of hours. Contrary to all the stuff I’ve read about writers being without honour in the film industry, I found I was very welcome on set. More than one person congratulated me. This was a sweet reminder: because I’d been out of the country for a month during the pre-production period, I’d come to think of myself as Interested Party, Supportive Parent, and Believer in the Project, and effectively forgotten I was Part of It All. This in spite of the FM’s having scrupulously consulted me over proposed changes.

What I saw of the movie looks great, the wrap party is today, and I may have a chance to drop in – in spite of being roughly twice the average age of crew and cast (more than 30 of them, not counting the cow), I’m told I’ll be welcome.

Meanwhile the Art Student is up to pussy’s bow in Hungry for Art – a festival that centres on The Gallery School (as the art department of Meadowbank TAFE is known). Last night there was a pop-up art event at the Top Ryde City mall: people were invited to break out of the lockstep shopping experience to take in a huge video screening of Todd Fuller’s Summer’s End and three pieces of Will Coles‘s street-friendly sculpture (familiar to Newtown but new to Ryde), and many did. There was also a little theatre, some beatbox and an oil painting created before shoppers’ very eyes. The big events – DrawFest and Open Day at the Gallery School tomorrow and an Art Trail through the Ryde suburbs on Sunday – are yet to come. And the Art Student is in the thick of it – organising volunteers, making signs, standing guard over sculptures under threat from sugar-high young people. I’m off elsewhere for the weekend, but if you’re in the neighbourhood, drop in. There’s more, but time is short.

PS: When I went looking for links, I realised that I have a photo of one of Will Coles’s works, taken a couple of months back. The work, ‘Laissez-faire‘, had been overwritten by graffiti, to extraordinary effect. No wonder he was so calm last night when the speedy children were doing their best to damage his ‘Finite’.