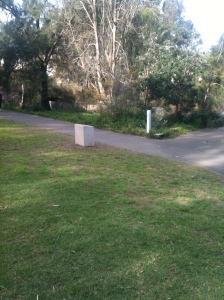 In a little strip of green not far from Harold Park Raceway, near where a bridge crosses Johnson’s Creek, a new object appeared the other day: a squat, squarish thing beside the path,  looking more than anything like a cardboard carton fallen off a passing truck – or given its distance from any road, perhaps from a helicopter. On approach, it turned out to be a block of sandstone with a plaque on top.

Over the logo of Leichhardt Municipal Council, the plaque explains itself:

In the early 1970s resident groups,
including the Glebe Society, joined with the
Builders Labourers Federation,
led by Jack Mundey,
to impose a Green Ban on expressways
planned to carve through
Glebe, Annandale and Lilyfield.
This plaque commemorates all the men and women who fought this battle. 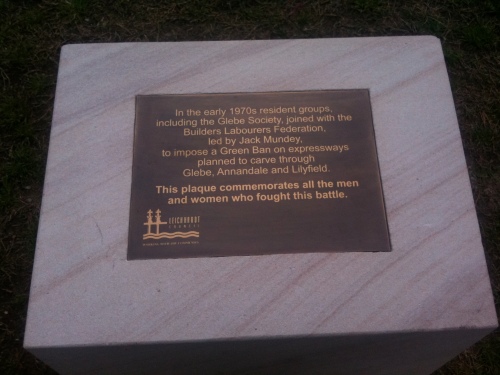 Well, I’m chuffed to be commemorated, and so I’m sure are the rest of the raggedy coalition of anarchists, Maoists (who created a poster showing a US flag as highway ploughing through tiny houses, because of course the expressway was a product of US capitalism’s relentless pursuit of profit), students fresh from the Vietnam Moratorium demos, out of work actors, etc, who joined the ‘battle’ with the starchy Glebe Society and the fabulous BLF. In those heady days I remember overhearing a conversation between a Philosophy Lecturer and an Eng Lit Honours student deciding not to blow up the beginning stages of the expressway because although they had it in their hearts to do it, they lacked the practical knowledge of high explosives. Inspired by something someone had read about successful protests in San Francisco, we built an adventure playground in a little park in Darling Street, Glebe, though as far as I know very few children actually availed themselves of our crude constructions. perhaps these are the kinds of reasons why we are being commemorated rather than honoured.

But why in this park? And why now? Isn’t there already a site-appropriate plaque in Glebe that gives more detail? This morning I took the dog to visit that pleasant little park, between 77a and 79 Darling Street. 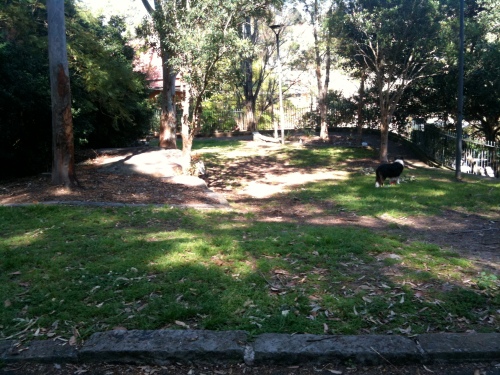 Yes, a pale patch of rock where once a plaque had been. Was this was the work of vandals or the result of Glebe being taken over by the City of Sydney? Did the Councils talk to each other? Is the new plaque some kind of replacement for the stolen/removed one? I’ve phoned Leichhardt Council and emailed the City of Sydney Council. The latter’s web site promises a reply within 14 days.