In Melbourne where the
jacarandas still flower
at December’s end

a pub in Carlton
promises European
yum cha on Sundays

With an afternoon to spare in Melbourne the Emerging Artist and I have drawn up our Best of 2016 lists.

Paterson (Jim Jarmusch 2016): ‘A wonderful portrait of someone with a rich internal life integrated with normal functioning.’

Spotlight (Tom McCarthy 2015): ‘This was taut as a thriller and had new things to show about how the story of child sex abuse in the Boston Catholic Church was brought to light. A reflection on institutional power.’

Hunt for the Wilderpeople (Taika Waititi 2016): ‘Made me laugh.’

I, Daniel Blake (Ken Loach 2016): Some people have described this as relentlessly grim. I know what they mean, but what that description leaves out is its tremendous warmth.

One-eyed Jacks (Marlon Brando 1961): I saw this with my big brother more than five decades ago and didn’t understand his reverential tone. Seeing it again at this year’s Sydney Film Festival was a joy.

Rams (Grímur Hákonarson 2015): So bleak and bitter cold, and so full of humanity.

Constance on the Edge (Belinda Mason 2016): ‘Constance is a wonderful character. The film shows the trauma of war and its after effects, especially for women, once you’ve settled somewhere peaceful. The loss of cultural identity in the process of becoming a refugee and how hard to create a new one. Also, how the CWA is changing.’

Sonita (Rokhsareh Ghaem Maghami 2015, seen at the Sydney Film Festival): ‘A most amazing film. Where did this young woman emerge from that she had the confidence to hold out against so many cultural taboos against singing, let alone rapping. She was exuberant and full of life.’

Where to Invade Next (Michael Moore 2015): ‘This is one of the best of MM’s films. It reminded me how much we’ve lost in Australia. It’s good to get a perspective on how other places do things differently from what we take for granted.’

The Beatles: Eight Days a Week (Ron Howard 2016): I was in a monastery during the Beatles’ touring years; for me this was a surprisingly moving and explanatory visit to my contemporaries’ teenage years.

Wide Open Sky (Lisa Nicol 2016): Michelle Leonard teaches music to children in remote and isolated northwest New South Wales. The movie follows four young people from audition to performance in her choir, and we learn an awful lot about music education, about being different in a small community, about discipline and expectations, about many kinds of big-heartedness.

Worst film of the year:

The Emerging Artist: Sunset Song (Terence Davies 2015, seen at the Sydney Film Festival): ‘It was just so bad. I don’t know where to begin. Where were the other women in the main character’s life? The lingering drone shot over the corpses was so terribly done with that shocking music behind it.’

Me: Up for Love / Un homme à la hauteur (Laurent Tirard 2016). I didn’t understand what many people in the audience were laughing at. Maybe it lost a lot in translation, or the idea of a very short man is irresistibly funny to some people, or (a kinder hypothesis) they were fans of the lead actor and were constantly amused by the trickery used to make him look short. 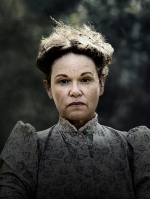 We both picked The Drover’s Wife (written by Leah Purcell, directed by Leticia Cáceres at Belvoir Street): ‘Completely riveting, powerful theatre that worked on so many different levels, and Leah Purcell in the title role was stunning.’ I’d add that it worked beautiful variations on the Henry Lawson story of the same name, and played wonderfully with audience expectations by having an Aboriginal actor playing a character who has always been assumed to be non-Indigenous.

The Signature of All Things (Elizabeth Gilbert 2014): ‘Having hated Eat, Pray, Love, I picked this up with low expectations, but found myself enthralled by a story of mosses, scientific discovery and a woman out of her own time.’

Purity (Jonathan Franzen 2015): ‘Nothing much to say beyond that I really loved this.’

The Museum of Modern Love (Heather Rose 2016): ‘A fabulous find. An Australian author who is very daring: she approaches Marina Abramovic’s The Artist is Present from many point of view, and gets to the heart of what was happening in the piece both for the artist and for the people who sat with her. Equally interesting for people who know nothing abut Abramovic’s work.’

My top three (links are to my blog posts about them):

The Unravelling: High Hopes and Missed Opportunities in Iraq (Emma Sky 2015): ‘I heard Emma Sky at the Sydney Writers’ Festival. The book is a detailed picture of life on the ground in Iraq after the invasion, and helps to make sense of the news stories.’

The Art of Time Travel (Tom Griffiths 2016): ‘This is a beautifully written story of how Australian history is still being discovered and is so different to what I was taught in school. It has inspired me to go on and read the historians he talks about, including Grace Karsken’s The Colony.’

Hope in the Dark (Rebecca Solnit 2004, 2016): ‘I’ve read this book maybe five times this year and each time it’s like getting another vaccination against bleakness.’

My top three:
Talking to My Country (Stan Grant 2016), especially as followed up by his Quarterly Essay, The Australian Dream
Missing Up (Pam Brown 2016)
The Art of Time Travel (Tom Griffiths 2016)

I feel obliged to say that such ‘best of’ lists are pretty arbitrary. No sooner had I drawn up these lists than I was aware of so much joy and enlightenment that had been left off them.

Happy New Year, dear reader. May 2017 be filled with good things and victories against the forces of darkness, some perhaps decisive.