This is my mandatory round-up post about the Australian Women Writers’ Challenge 2016. I undertook to read 10 books by Australian women writers. I read 14, which ranged from revelatory and richly entertaining to definitely meant for readers who aren’t me. Here they are. I’ve tried to be clever with the lay-out. My apologies if it shows up on your screen as a jumble.

A comic (that’s a graphic novel to those who think ‘comics’ means superheroes or Disney):

My general gender stats: This year I read 39 books by men and 31 by women.This includes at least five (the Y: The Last Man series) that were jointly written by a man and a woman.

Before the meeting: This book is based on the real story of the last woman to be executed in Iceland, an event that happened in 1830. My knowledge of Iceland, which comes mainly from photographs of stark, beautiful, treeless landscapes and Grímur Hákonarson’s movie Rams, led me to expect that any novel set there would be grim. So a novel culminating an execution could only be more so.

Grim or not, I loved it. I’ve raved about it to people met in the park, and barely restrained myself from reading bits aloud to the Emerging Artist (now known as the Heart Lady, but that’s another story).

At the beginning Agnes, convicted of brutally murdering her employer, is being transferred from one place of imprisonment to another. She is filthy, malodorous and barely able to speak. (Interestingly, her condition at the beginning of the novel bears a striking resemblance to that of the women towards the end of Charlottte Wood’s The Natural Way of Things, which I imagine was being written at the same time as this.) While awaiting execution, she is sent as a cost-saving measure to live with the family of a local official who lives near the planned place of execution.

The main narrative follows Agnes’ developing relationships with members of the host family: father, mother and two young adult daughters. At first the family are convincingly and reasonably horrified that they will have to share their house with this monster, though right from their first encounter the mother of the household is even more horrified at the way Agnes has been treated. A young trainee clergyman is assigned to attend to Agnes’ spiritual needs. Against the advice and instructions of his superiors, he refrains from preaching sternly at her and instead encourages her to talk to him. Because of the size of their dwelling and the bitter Icelandic winter, the family hear much of what passes between them, and we learn her story along with them. As you’d expect from the set-up, in the process they come to see her not as a monster but as a fellow human – more a servant than a prisoner.

All of that is beautifully done, though the story Agnes tells, a story of love betrayed, is less compelling than the circumstances of its telling. And then there is the narration told direct to the reader from Agnes’ point of view. This is where we learn Agnes’ inner story – the erotic experiences that she can’t speak of, and her emotional life. In these sections Hannah Kent’s writing, never less than elegant elsewhere, is rich and poetic without being hi-falultin, so that I for one was completely drawn in. I don’t remember ever being so caught up by a deft use of similes. Here’s a passage from fairly early on, when Agnes has begun to work again,  trusted to use a scythe:

I let my body fall into a rhythm. I sway back and forth and let gravity bring the scythe down and through the grass, until I rock steadily. Until I feel that I am not moving myself, and that the sun is driving me. Until I am a puppet of the wind, and of the scythe, and of the long, slow strokes that propel my body forward. Until I couldn’t stop if I wanted to.

It’s a good feeling, not quite being in control. Of being gently swung back and forth, until I forget what it is to be still. Like being with Natan in the first months when my heartbeat shuddered through me and I could have died, I was so happy to be desired.

The book’s power has something to do with the strong sense of a particular time and place. The world-building, to borrow a term from SF/F discourse, is extraordinarily convincing. In her acknowledgements, Hannah Kent says she set out to write a ‘dark love letter to Iceland’. She has succeeded in spades.

The meeting: As it was the last meeting of the year, we ate at the new (to most of us) Tramsheds in Glebe, and gave each other gift-wrapped books from our shelves. As always in restaurants, the background noise was a dampener in general conversation. But we all enjoyed the book. Someone compared it unfavourably to Halldór Laxness’s Independent People, saying that at times Burial Rites broke free of its early 19th Century Icelandic setting and resorted to tropes from 20th century romance fiction. Specifically, if I understood him correctly, Agnes’s internalised sense of the master–servant relationship vanished too easily and was replaced by an anachronistic expectation of romantic love and fidelity. In general we could see what he meant. Likewise, we all agreed when someone said that it was obvious what was going to happen from the very beginning: the family would soften towards Agnes, and her story as it emerged would reveal either innocence or major extenuating circumstances. Neither of these criticisms dampened the general enthusiasm for the book.

There were some mostly audible, goosebump-inducing readings of passages our Post-it warrior had marked.

Then we cheerfully turned away from the spartan, claustrophobic and bitterly cold world of the novel and enjoyed a meat-heavy meal in a flash new restaurant whose menu names the farms that provide the animals they serve up to their customers.

The verse, my last for this November: 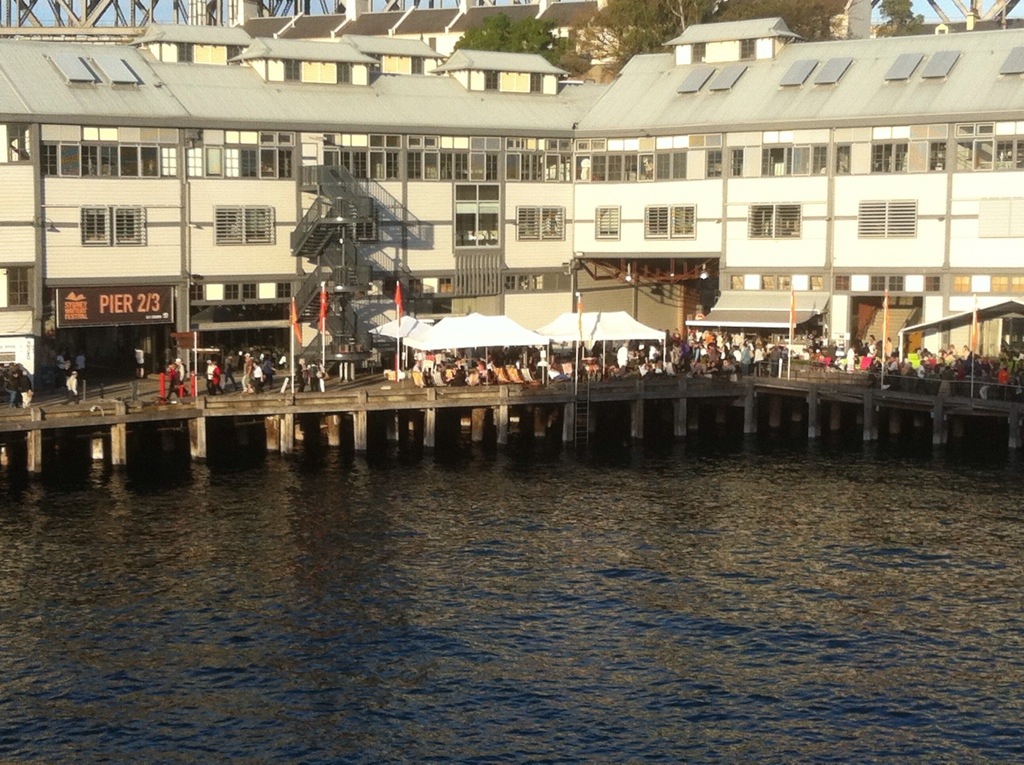 On Friday the sun was still shining. My only event of the day, in the Wharf Theatre 2, confusingly located on Pier 4, was

This is story time for a big room full of big people. It’s not quite as comforting as dozing off on your mother’s lap to the sound of a Hans Andersen horror story. Dozing is not unheard of, but the main point, at least for me, is to sample bits from writers who are new to me or who, as with two of this year’s line-up, I’ve developed a prejudice against (I’m not saying which).

But first, the Sydney Morning Herald Best Young Australian Novelist awards were presented by Linda Morris, who writes for the Herald on literary matters. These awards, instigated 18 years ago by Susan Wyndham who was and still is  Herald‘s literary editor, carry no monetary prize – each of four young(ish) people was presented with a certificate and what looked like a bottle of wine. They were: Luke Carman (An Elegant Young Man), who has been appearing in this blog for some years now; Balli Kaur Jaswal (Inheritance); Hannah Kent (Burial Rites); and Fiona McFarlane (whose The Night Guest won a money prize at the NSW Premier’s Awards). They stood in a row looking awkward while we applauded, then politely melted into the darkness to make way for the older writers, introduced with her trademark enthusiasm by Annette Shun Wah.

Lian Hearn, the novelist of mediaeval Japan formerly known as Gillian Rubinstein, author of much loved children’s books such as Space Demons and Beyond the Labyrinth, read to us from her latest Japan novel, The Storyteller and his Three Daughters, a smooth, lucid excerpt that was mainly about writing.

Dara Horn from the US read from A Guide for the Perplexed – her book, not Maimonides’ – giving us an intriguing glimpse of a book in which tales from two different eras explore the idea of having a total record of a life: in one, a character develops software that records everything; in the other a late 19th century scholar discovers a comprehensive trove of documents in a Cairo synagogue that had not been cleaned out for a thousand years.  Such a trove of documents really has been found, and such software isn’t entirely implausible

Alex Miller read from Coal Creek. I’m afraid I didn’t get much sense of the book from this reading. It was largely a mundane recount of a man and a horse called Mother and it went on well over its allotted time so that everyone else had to whip their readings along.

Eimear McBride read from A Girl is a Half-Formed Thing. In the bit she read the character was a 13 year old girl who may or may not have been contemplating suicide by drowning. The uncertainty was in the character’s mind, rather than mine, I think. The precise meaning didn’t matter so much: as Annette Shun Wah commented, it was like listening to jazz with, I would add, a beautiful Irish/Joycean accent. (The ABC has uploaded an earlier session of Eimear McBride in conversation with Michael Cathcart.)

Adam Johnson finished us off with a chilling bit from The Orphan Master’s Son. ‘You won’t understand this,’ he said, ‘because it’s an extract.’ It was the session’s only piece with a clear, strong narrative, and I would have rushed out to buy the book only two of my companions said they had read most of it, thought it was  really wonderful, but couldn’t finish it because it was so unremittingly grim. I still might give it a go …

We were on the train home before the Opera House and Customs House lit up for the Vivid Festival. We’ll look at the lights tonight, after a full day at the festival.