I doubt if I would have picked this up in a bookshop or a library. First there was the suggestion of possible illiteracy in the subtitle: it’s surely redundant to say an essay is not fictional, and what is this word ‘picto’? But moving on past that bit of pedantic persnickertiness on my part, the idea of a comic book essay didn’t look all that attractive. But I was given it a Christmas present, along with Ramona Koval’s Best Australian Essays 2011, and behold, the collection of non-picto essays is still in my teetering to-be-read pile, while I’ve read the comic and enjoyed it hugely. It does all the things that one could expect of a collection of essays.

One thing essays classically do is to interest  readers in things they never expected to be interested in. Here Nick Bertozzi’s ‘How and Why to Bale Hay’ and Rina Piccolo’s ‘Penny Sentiments’ (on the history of postcards) are prime examples of the type.

Other essays open up whole new areas of knowledge: here  Brendan Burford and Jim Campbell’s ‘Boris Rose: Prisoner of Jazz’ tell the story of a man who started creating and selling bootleg jazz records around 1940 and progressed to obsessively cutting records of obscure jazz radio broadcasts, so that when he died in 2000 he left a vast collection of one-of a kind recordings; Alex Holden’s ‘West Side Improvements’ tells of Chris Pape, who painted striking murals in a disused New York subway station; Nate Powell’s ‘Like Hell I Will’ brings to shocking life the 1905 Tulsa race riots, though massacre is probably a better word for what happened.

Then there are essays that cover familiar ground, but do so in a way that makes the subject fresh. So in ‘What We So Quietly Saw’ text from FBI reports on Guantanamo prisoner interrogations is rendered poignant by Greg Cook’s stark silhouettes, Paul Karasik manages in eight pages to provide a critical biography of psychologist Erik Erikson, and Alex Longstreth tells the story of August Dvorak’s all but completely fruitless struggles to have his typewriter keyboard layout supersede the eminently stupid qwerty (I had a nerdy joy when I read that all computers now can be switched to use the Dvorak layout, but I can’t see how to do it on mine, so maybe that’s another feature of essays – they don’t always give the full story).

Some degree of individuality, even quirkiness, is essential to the essay form, and the comic book as essay, with its strikingly personal interplay of word and image, inevitably has this element in spades. As a tiny example, take this frame from Paul Hoppe’s ‘Coney Island Ruminations’:

These four people are clearly not ‘New York’. It’s not so much that the abstraction of the text is tied down to a particularity, as that the particularity of the image suggests the vast range of individual experience covered by the text’s eight words. The book offers example after example of this kind of thing. A different kind of interplay comes at the very end of ‘The Sound of Jade’, Sarah Glidden’s piece about accompanying her father to China to adopt a baby. After walking us through the process, including observations of the other adopting USers, statistics of such adoptions, regulations governing them, moments of intercultural awkwardness and emotional rawness, Gliddens ends with a peaceful scene of the new family, then in a final frame we are looking into the room through a window from a slightly elevated angle, and ‘Sarah’ is looking out at us uneasily: 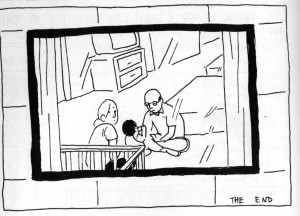 In a way that would be hard to achieve in any other medium, we’re left to do our own thinking about what might lie beneath her unease.

In short, this was an excellent Christmas present.