First, a photo from Friday night. This is Tamar Chnorhokian, who read first in Moving People. That’s not a sponsor’s logo in the background, the story was set in a supermarket. You can see what I mean about the performers having nowhere to hide. 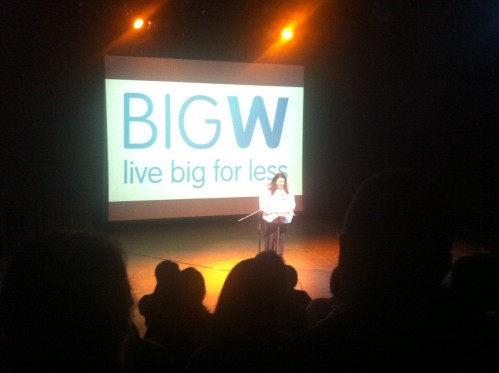 And now a sprint through my crowded weekend. My only serious queuing experience of the Festival was for the 11.30 session of What Would Edith Do? on Saturday – I got there before the previous session finished and so was comfortably towards the front of the queue. Edith Campbell Berry, the main character in Frank Moorhouse’s Dark Palace, Grand Days and Cold Light, may not have seized my imagination, perhaps because I haven’t read the first two books, but she has clearly been important to many people. I went to this hoping to find out what I’ve been missing and I got what I was after. Emily Maguire, novelist, discovered Edith in her late teenage years as a model of how it might be possible to live – rising to challenges and living nervously out of one’s depth rather than settling for the life mapped out by social expectations. She said there had been a number of times when she had actually asked herself the WWED question. Sadly, she deemed only one of them suitable for public exposure, but as it involved being invited to speak at a function in North Vietnam when she actually had no idea of the purpose of the function or who the Party functionaries thought she was, it was a perfectly satisfactory anecdote. The other panellists, journalists Annabel Crabb and Cynthia Banham, had come to the character later in life, but managed to convey the appeal. I realised that Cold Light is all aftermath: a woman who has lived daringly and intelligently, challenged convention in her private life and made a contribution on the world stage, returns to Australia in the 1950s where there is no place for such a woman and lives on scraps for the rest of her life. For those who have seen Edith riding around Geneva in a cowgirl suit or (is this really what they said?) stroking Anthony Eden’s head in her lap, the third trilogy is heartbreaking. Frank Moorhouse wasn’t there, but the best line of the session was his. He had told Annabel Crabb that one of the advantages of having spent 20 years with a single character was that she can now do her own PR and he doesn’t even have to turn up.

National Treasures was another poetry session that wasn’t quite what I had read the advertising to mean. I thought the participants – Mark Tredinnick, Vivian Smith and Judith Beveridge – were going to talk about Australian poetry they treasured, and read some to us, plus some of their own. What we got was excellent, but it wasn’t that: Judith Beveridge stayed firmly in the chair role, and the others talked of their own writing careers, and read from their work. When he was 15,  in the 1940s, Vivian S had sent off poems to The Bulletin, then pretty much the only place that published poetry in Australia. He received encouraging responses from the literary editor, Douglas Stewart, advising him to ditch the archaic poeticisms and recommending that he read contemporary poets such as T S Eliot. Decades later, Mark T was similarly advised by critic Jim Tulip, but the poets he recommended were William Carlos Williams, Robert Gray and Vivian Smith.

Tasmanian Aborigines was next, in which Lyndall Ryan talked to Ann Curthoys about her new book, a rewrite of her 1981 book on the same subject. Inevitably, the session involved a revisiting of the so-called History Wars: Keith Windschuttle had singled Professor Ryan’s 1981 book out for his accusation that lefty historians had fabricated evidence of massacre and his claim that in fact the original inhabitants of this country had just faded away when the Europeans arrived, possibly because of their inherent weaknesses. Windschuttle has been thoroughly discredited as a historian, of course, but it was interesting to hear Ryan’s take on the episode now. Asked what difference his intervention had made to our general understanding of Australian history, she said that paradoxically he had driven her and other back to interrogate their sources more thoroughly, and where in her first book she had focused on Aboriginal resistance, she had now looked at ‘settler activism’ and found that the evidence indicates that the violence of the frontier was much worse than historians had previously understood. Massacre, for instance, looms much larger in the new book than it did in the original.

Anne Curthoys was warm and personal as her interlocutor. She opened with a wonderful quote to the effect that in order to write history, one needs to have a deep commitment to the subject that relates to some great love or business in the present, and asked Lyndall Ryan what this love or business was in her case. But Professor Ryan was not to be seduced away from her calm, scholarly demeanour, and answered in terms of the breakthroughs in research since 1981. The question in my mind, which I didn’t get to ask, was along the same lines: as a white Australian, uncovering the evidence of terrible things done by your own forebears, how do you keep your composure, or if (as I think would be desirable) you lose your composure how do you keep your scholarly integrity? I guess I’ll just leave that one hanging.

Then I was back to the sun-filled Bangarra Mezzanine for Poetry Australia with Robert Gray, Rhyll McMaster, Tricia Dearborn, Geoffrey Lehmann – and the unfulfilled promise of Robert Adamson. It was a dazzling session – the sun was low over the Harbour and from where I was sitting it was impossible to look directly at whoever was at the lectern. Speaking less literally, it was okay. Each of the four poets read from their own work – some startling eroticism from Tricia Dearborn (I mean that in a good way), two poems from Rhyll McMaster that had me reaching for my pen to write down brilliant lines I knew I’d forget, in a scribble I now can’t read – her new book, Late Night Shopping, is now on my To Buy list. Geoffrey Lehmann read ‘Parenthood’, which begins ‘I have held what I hoped would become the best minds of a generation /  Over the gutter outside an Italian coffee shop watching the small / Warm urine splatter on the asphalt’, and lives up to the promise of it opening. Almost as if in direct reference to Ali Alizadeh’s scathing Overland review of the Lehmann–Gray anthology, Robert Gray read a number of John Shaw Neilson’s limericks.
In the short Q&A, someone did tactfully name the elephant in the room. A bookseller from Perth, she said that the anthology Australian Poetry Since 1788 was selling brilliantly. But, she said, she didn’t understand how a fine poet such as Fay Zwicky hadn’t made the cut. Ali Alizadeh, John Tranter, Peter Minter and other fierce critics of the anthology might have asked the same question but added a hundred names and whole classes of poetry, and gone on to challenge the inclusion of limericks. Here it was a genuine question rather than an attack. It seems to me that what was missing in the selection process was the intervention of someone who knew the field  and could veto the editors’ eccentricities. I can see why it would be hard to resist modifying the general perception of John Shaw Neilson by including a swag of limericks, or to include 14 poems by ‘Bellerive’, whose poems never even made it to the literary pages of the Bulletin of his time. But that’s when an authority figure needs to step in and rap someone over the knuckles.

Oh my paws and whiskers, across the road again to see Hilary Mantel on a huge screen in the Sydney Theatre talking about Bring Up the Bodies. What can I say? She was magnificent, and I’ve now got the book on my iPad. A friend of mine couldn’t read Wolf Hall, because he couldn’t tell who was being talked about a lot of the time – the book would say ‘he’ and expect you to know it was Thomas Cromwell. Evidently a lot of people had the same difficulty, because this new book says ‘he (Cromwell)’. As Michael Cathcart, interviewing Ms Mantell from our stage, said, you can almost hear the author saying, ‘Is that clear enough for you?’

[Added on Wednesday: The Literary Dilettante has an excellent account of this conversation here.]

Gluttons for punishment, we rushed from the theatre and drove to Marrickville for an evening of youthful cabaret/burlesque, which might have been on a different planet, but that’s another story altogether.

On Sunday, I only managed one event, The Oskar Schindler of Asia? in which Robin de Crespigny (pronounced Crepny) and former people-smuggler Ali al Jenabi conversed with ABC’s Heather Ewart (who is much smaller in person than she seems on the TV screen). This was 2012’s equivalent of last year’s conversation with David Hicks. Like Hicks, Ali al Jenabi is being treated unjustly by the Australian government. Although the title of the session is a quote from the judge who tried him for the crime of people smuggling, the government is so committed to the demonising term ‘people smuggler’ or at least so terrified of being attacked by the snarling Tony Abbott  if they are seen to be soft on such people, that al Jenabi, who seems to be a perfectly decent man who has endured terrible things, remains on a bridging visa pending deportation, even while all his family are now Australian residents.

It was a great Festival. Now I have to get back to work.